A few weeks ago I asked for suggestions for a name of a puppy. I got a number of cute and some controversial names. Hohumm... don't ask why. Anyway, SEO buddy and dog-lover John Rennen one morning came up with a brilliant suggestion and I instantly liked the name!

So I bugged Marc and then bugged him some more coz I was so excited over getting a puppy. He didn't tell me that the unthinkable happened, Gail said the puppy got sick and died. They'll just give me hamsters instead. Sniff sniff.

Anyway, to appease my disappointment I decided to go ahead and buy the laptop I've been planning to get since last year. After months of online & offline canvassing and collecting flyers from different shops I managed to narrow down my choices to either a Compaq Presario V3304TU or a MSI Megabook S262 laptop. Let's not talk about all the other laptops I drooled over, they were just beyond budget, sigh. So, I decided to get the MSI Megabook since it came with good reviews from my friends, met my requirements and Markku piqued my interest when he mentioned that they had it in pink.

Anyway, so it was down to that then I scouted for the best place to purchase it and ended up ranting over poor customer service*. So yesterday before heading for Octagon Computer Store I passed by this new laptop supermarket at Park Square and discovered the MSI promo for the blue/pink Megabook S262. I was baffled when the store clerk said that I wouldn't get all the freebies (camera + 1GB usb drive + bag) when the flyer clearly said "camera plus 1GB usb drive plus bag). Mambobola! So I headed over to Octagon and deliberated with my best friend over the phone on whether I'd get a pink or a blue one.

The store clerks in Octagon were definitely attentive and helpful, not like the shop in front of it. They even had the one I liked pulled-out from their Megamall store so I won't have to come back on another day. So... meet HAPPY who came with a Canon camera, 1 GB pink usb drive, 1 pink bag, 1 black bag and a laptop sleeve. Cool eh! 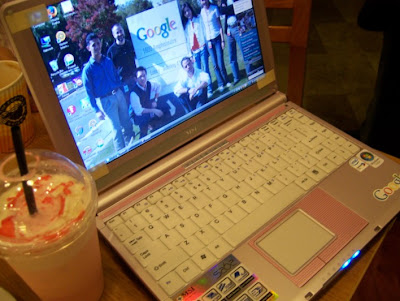 The pink laptop I bought when I was wearing a pink dress and
which I had a strawberry pink drink with this afternoon. Abe said I
should name her Pinky coz its... but I told him it's too mais :D
And guess what I told Anne on our way out with Happy... "I feel like I have a new boyfriend!"

*Update - Silicon Valley called me a day after I faxed my blog post to them and the area manager apologized for the poor service I've been getting since their SM Bicutan branch opened. They promised that they'll do something about it. Passed by the other day, but decided not to enter the shop. Let's just say it's quite hard to forget how I was treated the last time.
Ipinaskil ni Aileen Apolo-de Jesus sa 6/17/2007 12:02:00 AM