I Am M.E. Miguel Escueta

You might have noticed that I've been attending album launches in the past few months - Christian Bautista, Rachelle Ann Go, Jimmy Marquez, Josh Groban's "Awake" album, Luke Mejares and now Miguel Escueta. It started out as a tag-along, just for me to experience what it is to be a technopreneur (coz I wanna be one!). But then, I enjoyed the first launch so much, Jay the expert technopreneur behind Titikpilipino.com allows me to tag along whenever our schedules jive.

Anyway, I was on my way to Makati for a meeting and I managed to squeeze in some time for Miguel Escueta's debut album, "I am M.E." at Redbox, Greenbelt. I was late, but I caught Miguel's first song "Sa Pagkawala". It piqued my interest and Jay whispered that Miguel is from Ateneo (later on I found out that he graduated with a degree in Business Management major in Communications Technology). Miguel's songs sounded so foreign especially when he sang "Take Me There" and "Falling Away". According to him his musical influences include Coldplay, Lifehouse and Parokya ni Edgar - "Harana" being the first guitar song he learned how to play at the age of 12. 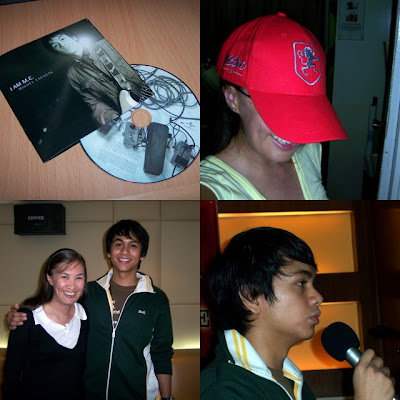 The cute 23-year old said he's a shy guy and only had one serious relationship - he is a very persistent suitor though and is single and available. The Ely Buendia look-alike wants to be known for his lyrics, music and showmanship. The album "I am M.E." is all-original and something I'm sure people would enjoy listening to. I checked out the song lyrics and they are indeed deep and doesn't give away the whole meaning of what he's trying to say. Check out "Isipin" for all you torpe guys and "Falling Away" for those on the brink of a break-up.

And notice the writing on Miguel's hand, "Vivite Somnia!" which he said means "Live your dreams".

Thanks to MCA Music Inc., it's my first time to get a free album! And Mossimo for the cap which shielded me from the hot sun when I walked to my next appointment.

Goodness! I think I just sounded like a teener! Anyway, M.E., you've just made a fan.

Here are some videos I took:

Take Me There
Balik Simula
Falling Away (carrier single)

Email ThisBlogThis!Share to TwitterShare to FacebookShare to Pinterest
Mga etiketa: falling away, i am me album, miguel escueta, titikpilipino.com