Why We Shouldn't Be Too Resilient

According to IRIS, earthquakes with a magnitude of 2 happen several times a day. Small volcano eruptions happen every few months (SDSU). There are about 96 tropical cyclones every year according to UIUC with about 20 hitting the Philippines annually (PAGASA). I think majority of us who grew up in the Philippines experienced a disaster (my generation also experienced a number of coup d'etats).

Many say Filipinos are resilient. I guess I am. I'm resilient with a bad case of PTSD. I giggled when I saw people panicking over an inch of floodwater in Orchard Road. "Wala yan sa baha sa amin," I thought (That's nothing compared to our floods). It made me feel both proud and annoyed. My friends from other countries are always awed with my disaster stories. To them it's unimaginable how I managed to get out of floodwater that was up to my neck during Typhoon Ondoy.

And with climate change things are just getting worse.  Only the Bicol region was hit hard by typhoons when I was growing up. Now, no one is spared from it. I'm still jittery whenever there's a typhoon. Sweetie and I experienced our worst disaster three months before we tied the knot. We made a promise to each other that we would move to a place where it doesn't flood. Of course, we still worry a lot because our parents still live in our childhood homes.

The recent typhoon, #OdettePH, wreaked havoc in the VisMin region. It's been two days and I have heard from my best friend. I hope he's just unable to respond because there's no signal/electricity in his area. I can't help but worry though and all I can do now is pray. My other friends have been posting about road closures, no signal, no electricity in their areas. They had to find ways to get to an area where they could send messages to their loved ones that they're okay. I understand their pain because I've been through it too. 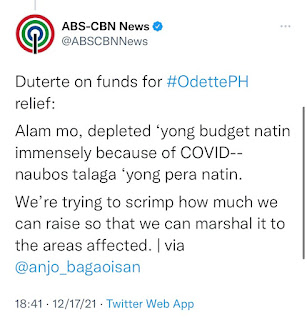 I realized though that this "Filipino resilience" spirit is going against us. Because we always find ways to help ourselves and others, we've allowed our government and service companies to slack off on their services. I read PAGASA Cebu was rendered helpless because their equipment needed an upgrade/wasn't working. Telcos going offline. Reports that electricity won't be back for a few weeks. I think someone, somewhere in the agency/company could have projected the effects of these disasters. And there's been a lot of disasters we could have learned from already. Shouldn't we have worked on putting cables underground?

It's just unfair that we're always subjected to suffering through these disasters when the support system could have better prepared for it. The president is now saying that funds have been depleted. Really? Then why did the government spend hundreds of millions on the Dolomite beach? Why did they contract out of Pharmally? Why did DOH allow millions of medication to expire?

Sigh. I don't have the answers to the questions, but let's help where we can, yes? Here's where you can send help - 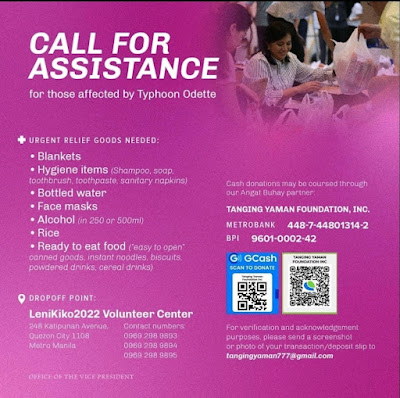