Joyride to the 44th Floor!

It was my first time yesterday to be more than 3 kilometers away from our home. We had to go out for an errand in Ortigas. To avoid traffic we went through SLEX, C5 then went through McKinley, BGC and we experienced the new Estrella-Panteleon Bridge. I was surprised to see many new buildings in the area and baffled how we got to the Kapitolyo area so fast. There were so many new developments I got confused where we were already, LOL. 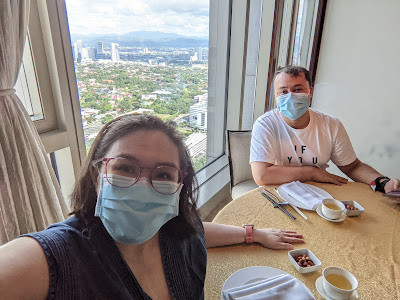 Unfortunately due to heavy traffic we reached out destination at noon. They were already on lunchbreak, so we had to wait. Sweetie was wary of having me walk far from our destination so we ended up in the hotel next door because there were no waiting area in the office we went to. We were also avoiding crowded places, so we ended up in the 44th floor of the hotel. True enough the resto was empty. We ended up having an instant date with a nice view of the mountains in Rizal. 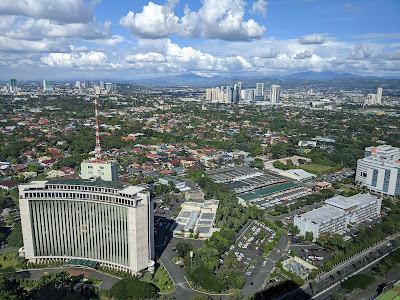 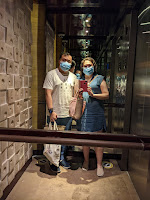 I honestly don't remember the last time we dined out. Ah, I think the last time was at Starbucks Raffles Hospital just before we went home. We already considered it a date since we went out sparingly. I told Sweetie I hope we can have a longer joyride in early January. Maybe just go somewhere to eat and see nice views for a day. We've also been super tired lately from the move. My Fitbit actually said I needed for rest, hehe.

I was happy to do our little errand. It became a joyride and a date! I'm already used to staying at home, so will just want to do this every so often and only if it's really needed. I haven't even been to the mall or a grocery. I don't miss it anymore since I can just do my window shopping by scrolling through Lazada, Shopee, Amazon or my favorite fabric shops. Just add to cart and just leave it there until the want fades away. I usually delete the items in the cart a few days later when I realize I don't really need to buy anything (unless it's my fave milk tea heehee).

P.S. Hope to unearth more clothes in the coming days. Ended up wearing an un-ironed dress when we went out hahaha.