Have You Tried Mushroom Sisig?

I saw an ad on FB about kabute sisig (mushroom sisig). I got curious and clicked on the ad. The product is made by "The Kabute Farm".  They are based in Lucban, Quezon which is my Dad's hometown. I figured it probably tastes good because it's from Lucban so I ordered a few packets. 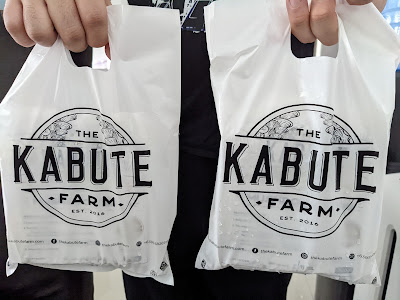 Got a message yesterday morning that they were going to deliver the frozen mushroom sisig. Soon enough the Toktok rider arrived and I told the boys we'll have sisig for dinner. Cooking was easy after defrosting the packet. I wasn't sure if 300 grams was enough for the three of us so I decided to cook 2 packets. Added some olive oil on the pan and sauteed the mushroom sisig in low heat for five minutes. Well, Miggy had to take over cooking because I cut my thumb while washing a pair of scissors (whoops!).

Miggy made some sinangag and fried egg to go with the mushroom sisig. I brought out a bottle of Knorr liquid seasoning since it usually goes well with sisig. I was anticipating that the sisig would taste like mushrooms, but it didn't. It tasted like your regular pork, yummy sisig. It was like Gerry's Grill/Giligan's sisig, but without the oily flavor. It was really good and I was surprised it was really filling. I'll definitely order again soon!* 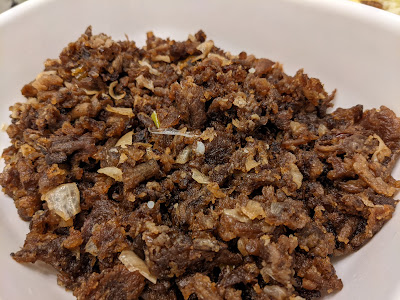 Next time I'll probably order some of their Vegan Mushroom Sisig Pizza. Just a thought since they're based in Lucban, maybe they can also make mushroom longganisa? I'm not sure how feasible that is, but maybe they can try. I'm happy to be their guinea pig hehehe. This was a really good buy for us since we've been building a new set of healthier meals we could have at home.