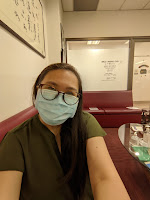 Atas is a term they use here in Singapore. It refers to "VIP/being treated like a VIP" or in colloquial term in the Philippines it means "sushal". I've known about the term, but it was the first time today it was used for me.

After my doctor's appointment I jumped in a cab. The taxi driver was quite friendly and asked me if everything was alright with my hospital visit. I said my doctor was happy with my progress and that we spent an hour for the consultation. He said, "Wow! You're atas!" I laughed at his exclamation. He explained that doctors usually don't take that long when they see their patients. In the short ride he said atas several more times because he couldn't believe my doctor spent so much time with me.

Well, he would have probably hit the roof if I told him my doctor has written a six-page report about me. He started the report in February and updates it whenever I have something new. The one-hour consultation isn't really a new thing because he really spends a long time with his patients (most are elderly, I'm the odd one usually hehe). It is unusual for a doctor to write a mega report, but he's been keen to solve the mystery of my blood clots. He explained that it's really unusual because my tests do not clearly show the cause and they don't add up. He said my case is more exciting than a Kdrama. Hahaha!

I used to be so anxious about not knowing. Other similar patients like me usually get a full explanation from their doctor. I've had several doctors in different hospitals try to crack the mystery, but no answer has been found. After three years of chasing to solve the mystery and getting poked so many times I've given up. I'm just leaving it all to God. I've also re-connected with one of my favorite saints, St. Jude, to pray for another impossible request.

So I'm atas. I look at the mystery now as a special challenge for me from God. It must be the next miracle He will provide for me soon :)