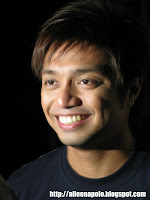 I met Nyoy about 15 summers ago. We were kids having fun in a theater workshop in our community and that's where we became tinikling partners! LOL. I'd never forget that day because my foot got caught in the bamboo while we were performing. A painful experience I'd never forget, but I smiled through that since we were, uh, performers that night. Even then Nyoy had a golden voice. He was the rave in the community and nearby communities.

After that summer most of us went our own way. Went through college. Started working. Some went abroad. One thing though for those who stuck together - we surely were Nyoy's fans. He doesn't know it but we've watched some of his concerts, but were too shy to say hi. I bumped into him a couple of times through the years, but I never expected to come face-to-face again with him since we're obviously in two different worlds.

Sweetie surprised me with a copy of "Heartstrings" a couple of weeks ago. We both didn't expect that there would be an album launch, but I made an album review anyway for Titikpilipino.com. Another surprise, Sweetie got invited to attend the album launch and guess who tagged along? Me! Too bad my best friend's in Cebu, he would've wanted to go as well. 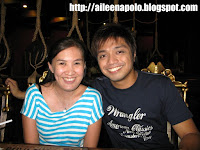 I felt quite sheepish when Nyoy suddenly waved at me while he was being interviewed on-cam. Entertainment media icon Mario Dumaul even looked back to check who Nyoy saw. Meeh. Hehe (covers head with a paper bag). Anyway, I must say that Nyoy is still very much the same guy I met when we were kids and I'm so proud that he continues to produce great music. In this video he talks about his new album "Heartstrings".

And below is the carrier single of his album, "Because". I asked Nyoy if he were to choose one song from the album that would describe his life now what would it be. He chose "Because" coz he thinks that's what one should do, "to love and just make someone happy". In love? Yihee. Anyway, he knows where I live, so before he comes and bonks my head for that quip here's the video:

For more info about Heartstrings and to order online please go here. My album review can be found here.

A couple more songs I got during the launch: