A Night of Mariah 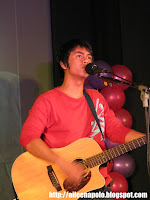 I know a couple of friends who are fanatics of Mariah Carey and for good reason. She's got multiple hit songs (more than Elvis Presley) and was recently one of the artists to be featured in the American Idol. Her latest album, E=MC2 ("squared"), hit gold within 8 days of release here in the Philippines and garnered awards too in other countries.

MCA quickly put together an "E=MC2 Victory Party" which was promoted through word-of-mouth and the internet (yup no tri-media ads!). The party was packed!

Anyway, I was feeling sheepish with my Blogger t-shirt and jeans outfit since I did not expect that there would be a red carpet thingy (beauty angst alert!) and that everyone seemed to be dressed up and all dolled-up. Anyway, good thing Sweetie and I found seats, so I just kept myself invisible the rest of the night. 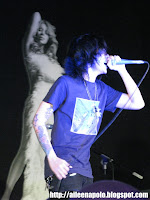 MCA artists performed the whole evening, starting off with Zoo (the band which Arnel Pineda was part of) and they sang "Always Be My Baby". Miguel Escueta looking a bit peeved followed, and then came Diane Elise, Pedicab, Chicosci and Richard Poon. Each gave their own rendition of a Mariah Carey song. (I'd like to add that I think singing her songs is really difficult, much more when one sings it in a different version).

Chicosci's "jam-like" rendition of Hero was notable (they were just actually playing around). It was extremely hard to take photos of Chicosci since the lead singer moved around a LOT. It was a good thing I thought of putting my cam on "sports mode" and it worked!

t was Richard Poon though who sang the best Mariah Carey song. He did his own version of "My All" and I would like to believe he floored the audience. He's come a long way since he launched his album last February and is just getting better and better. Here's his version of Mariah Carey's "My All".