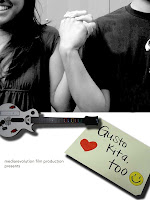 I managed to watch Rica Arevalo's short film "Gusto Kita Too" the other day with Sweetie. The film is bundled with "Sa Pagdapo ng Mariposa". Rica said that it's the first time in Philippine cinema that a short film is featured with a full length film.

Anyway, after watching "Sa Pagdapo ng Mariposa" we had to wait awhile to see "Gusto Kita Too", so make sure you stick around after the main film. The film was spunky, cute and straightforward. It successfully managed to fit in a lot of noteworthy messages in less than 10 minutes.

Fil-ams feel disjointed about not knowing how to speak Tagalog.

I have a lot of friends who were born and bred in the US and don't speak Tagalog. It's a wonder that most of them are enrolled in speak-Tagalog classes. There's also a strong feeling of being "incomplete". They are aware of their heritage, but know nothing of it. My niece in the US is bent on learning a lot about her heritage and is a better tinikling dancer than me now.

Parents of Fil-ams want them to hook-up with non-Filipinos.

"Sorsi ikaw ba ito?" Just read her blog and you'll know what I mean. I guess there is that preference among those who toiled hard to be able to migrate to the US. I just noticed though that a lot of my Fil-Am guy friends prefer homegrown Pinays. Mas maalaga daw kasi.

Anyway, the short film shows us a glimpse of what it is to be Filipino born and bred in another country. The fact that they long for home is undeniable and a stark reality. It's sad, but you know we can always bridge the gap by providing them with Filipino culture rich content (that's what I'm trying to do with my blog). O dibah?

Here's the interview I did with "Gusto Kita Too" writer and director, Rica Arevalo -

What inspired you to do this film?

I took a one-month vacation last December in California just to enjoy and explore the entertainment scene there. At the back of my mind, there was this yearning to do a short film. I purchased a Sony HDV camera but I was not yet sure of what story to tell. So I just immersed myself with the "culture" there. I had some cool cousins there who are Fil-Ams and cannot understand Tagalog. One of their angsts was their parents spoke in English while they were growing up (for them to adjust since they are immigrants) and they took their native language for granted. They regret not speaking in Filipino now.

Everyone falls in love so I wanted a story that most people can relate with---light, fun and entertaining. Since we are Pinoys, I wanted to incorporate the old/modern Pinoy style courtship.

How long did it take for you to do this film? What was your thought process in doing it?

I shot my short film, two days before I flew back to Manila. I asked some relatives and friends to be my actors. So all of them are first-time actors! It was labor of love for everyone. I never imagined that our theatrical run at Robinson's Indiesine would be extended!

I wanted to interview Rica on-cam, but she said that I'd never see her in front of a camera. Anyway, if you watch the film you'll get to see a glimpse of her, well not her, but her twin. I also interviewed her for You Got Tech about video blogging, so watch out for that post too.

"Gusto Kita Too" as I said is spunky and straightforward. I am sure a lot of people would be able to relate with it. And for the Pinoys, I'm sure the torpes would be able to pick up some tips on how to make ligaw. It's still showing together with "Sa Pagdapo ng Mariposa". Here's the schedule :