December One Second Everyday, Cooking with Miggy and Gardening!

How I wish I could use Molly Weasley's spell to magically organize everything at home. I am getting anxious because I haven't been able to sew and do other creative stuff. Since I overdid things last week which ruined our media noche, I'm going to limit the clean-up time so I can get enough rest and do other things.

I was on a roll yesterday. My arm was hurting so I was forced to just sit still. I ended up writing 4 blog posts and edited one video. It was good to just relax for the day. It also allowed me to work on the design of the maker/craft room.  That task has been pending for a few weeks now. Interior design isn't really my cup of tea. It makes me go zzz, hahaha.

One of the things I've enjoyed doing the past few weeks is cook with Miggy. I have been involving him whenever I cook so he could learn firsthand. He is a natural like his Papa Lolo and he seems to enjoy cooking more than me. We've been able to film short videos and that's what I've been editing (check it out and subscribe to Recipes for My Son). The videos are meant to serve as a guide for Miggy. I started doing this because I realized we weren't able to preserve the family recipes of our elders.

On gardening, I think I mentioned in passing that I almost killed the bird nest fern. It was overwatered. The good news is I realized my mistake early and it looks like it's recovering. I should have researched about the existing plants first before I went on a daily watering rampage! Apparently I should just water the plants 3x a week. Since I was on a roll yesterday, I also made a post on The Balcony Farmer. We're still debating whether we should change the name of the blog since we don't live in a condo anymore. Well, our pocket garden is a floor higher than the road, so maybe we could just stick to the name. 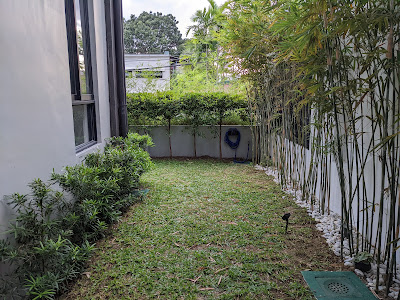 I planted some bell pepper seeds before Christmas. I used the seeds from the bell pepper I used for the chorizo pasta. It's been exciting to check on the progress because I didn't expect many of the seeds would sprout. Well, from experience it takes a lot of care to get the plant to bear fruit. I hope to get a couple that would mature so I won't need to buy bell pepper anymore.

The cuttings I brought from Singapore are still alive! I separated the pothos into two jars so they can grow better. Only two leaves of the the baby rubber plant survived when I transferred them to a pot. They look okay, but I'm monitoring them closely for now. My Mom has been wanting to give a couple of plants. I told her I'm taking it slow for now since I want to make sure I keep everything alive. Maybe I'll pick up the plants in a week or two.

Whew! Looking back at the past few weeks made me realize that I've been doing a lot. I'm supposed to be slowing down. I just have this odd compulsion to stay productive even when I'm physically challenged. I told myself I'm going to do what Sweetie does and write down daily tasks. I think that would help temper my compulsion to stay productive, haha.