The past two months have been a blur and have been filled with challenges. What is remarkable though is the fact that I have acquired new skills! 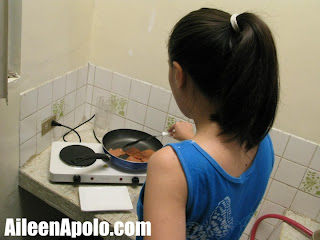 I learned how to cook on my own! (I was always assisted by a helper before).

My first cooking attempt literally went up in smoke. I was supposed to cook some sinangag but the electric stove blew out white smoke so we immediately unplugged it and put it outside. We didn't know that was normal so it took a week before we tried again. A week after I tried my hand on frying Maling. Easy huh? But it was a nerve wracking experience for me and I had Sweetie supervise me in case I panicked. This went on a couple of times until I was comfortable enough to cook on my own. 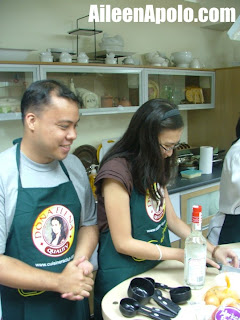 Eventually we leveled-up and joined the Cuisinera Club cooking class! Since the dishes that were being prepared were for Valentine's the chef chose us to help her out because we were newlyweds! I accidentally cut my finger the night before (second time that week), so Sweetie took over the slicing chores and I sauteed the salad dressing. It was fun and gave me the confidence to try out more dishes. (And special thanks to Dona Elena  for the olive oil, black and green olives and sardines care package!). We're also cooking everything using olive oil (more healthy yay!).

We've also conquered our washing machine after it was repaired by Samsung (thanks for being efficient!). Apparently the travel guard was supposed to be taken out by Abenson when it was delivered. The non-removal caused the loud vibrations and disco-grooving that our washing machine did when we used it. Took a few weeks though before we started using it since we were gone for almost 2 weeks. Doing the laundry now is a breeze! And Sweetie has color coordinated my sampayan!

And another milestone I am happy to note is the fact that I have somehow learned how to iron! I've been doing it instinctively though, but I think I've improved a bit. I will likely try to hone my skills better by watching some Youtube videos. I just keep forgetting to do so.

Oh yes I am so far happy doing all these house chores. I hate cleaning up though because it usually triggers my asthma. Good thing Sweetie loves doing this so he does it most of the time.
Ipinaskil ni Aileen Apolo-de Jesus sa 2/26/2010 12:26:00 AM