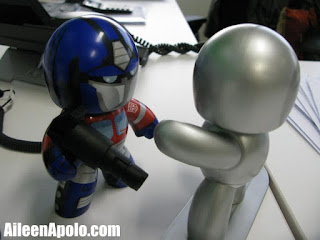 When I was a kid we were victimized by the dugo-dugo gang. My Yaya Men (nickname for Carmen) got a call and was told that my parents met an accident and needed money. Since she didn't have any cash on her she was instructed to bring whatever appliance she could get her hands on. She then went out of the house and met the guy at the labasan and turned over our VHS player. It was our most expensive appliance in the 80s and it came from my Ate who lived in the US.

Last week we saw written on the homeowners association a warning that the dugo-dugo gang has been focusing on our village. My Mom briefed our helper about it before she went on vacation. Just two days after my parents left our helper got a call and was told that Jay (my husband) was in a car accident with his Mom in Makati. I found out about this when she called me up right after the call. She sounded very harassed when she relayed the message to me.

I had to have her tell the story twice because she was really rattled. I told her then to calm down and not to worry because Jay was okay (he was right beside me) and that their car was actually parked in our garage.

The day after early in the morning our helper noticed that there was somebody outside the house. The guy looked like he was stalking the place. She immediately went inside and locked up and asked the neighbor to check if the guy was still around. At around lunchtime she got another call from the dugo-dugo gang and got the same story. She didn't panic anymore since she realized that it was the same guy who called the day before.

Unbelievable. While so many people are working hard to earn a living these criminals continue to scour and victimize homeowners. It's sad to see that more than 2 decades later since we were victimized they are still around.
Ipinaskil ni Aileen Apolo-de Jesus sa 2/06/2010 10:51:00 AM