I've been having terrible allergies the past year. I'm allergic to chicken, crabs, chocolate, Coca-cola and cockroaches! It's horrendous since I think I can live with having rashes, but I get asthma attacks whenever I eat any of those “C” food or smell roaches. I was not sickly when I was a kid so it's been hard.

A few weeks ago I was surprised when my eyes suddenly became swollen. I just thought it would go away after a few days, but it just got worse after I got back from my Cebu trip. I was in pain so I went to see a doctor.

Allergies. Again. Doc said, “Since this has occurred before, you have to start accepting the fact that you are allergic to something in the environment.” I had no choice, but just to stay indoors (with windows closed) or maybe live in a bubble until the season ends. I just hope that I won't have allergies on my wedding day. Harumph.

I jumped at the chance to attend an event about a hypoallergenic product. I had no idea what it was, but I went anyway since I thought it might help me. The product was Del's new hypoallergenic fabric softener. It's basically an anti-itch product and had Francis Magalona's very cute son as it's endorser (see his Itchy dance here). 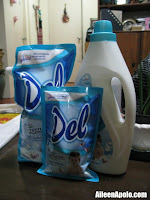 And the reason for this very late post is because I had no idea how to blog about it. I'm still under my Mom's care and that means laundry is not one of my chores. I gave her the sample and completely forgot about it since I've been flying from one place to another in the past few weeks.

Anyway, when I got home the other day from a trip, I snuggled in bed and was surprised that my blanket and sheets smelled really good. I kept smelling it and realized that I didn't sneeze at all even though the scent was pretty strong (which is a very good sign). And so far things have been great since my eyes haven't been swollen as it was before. Not sure if it's partly because of the Del fabric softener, but it sure helped. So I guess when I have my own household soon, I will be using it too.
Ipinaskil ni Aileen Apolo-de Jesus sa 9/25/2009 07:29:00 PM