The Zen of Malling 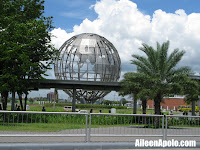 And then he said, "Very good." I was quite pleased with myself coz he agreed that the exercise I was doing was good for me. Who would've thought? was my balloon thought. We were half-way through my check-up when he asked again what exercise I did and then he paused when I said, "Malling" and he said, "Malling? Malling? What's that?" It was my Kuya who explained that I normally just walked around the mall to go window shopping on weekends as my exercise.

My doctor burst out laughing and then promptly scolded me. LOL. Is there such a thing as being "zen" in a mall? My good friend Juned keeps reminding me to relax and just "be zen" since he knows I've been quite stressed lately. So yesterday I brought the kids (Miguel and 2 nephews) to the Mall of Asia. Miguel was scheduled for a lesson at the Lego Mindstorms Robotics Center while his cousins didn't want to go with their Mom and sisters to Glorietta. So I was in-charge of three boys yesterday.

When we arrived I was curious why there were a number of policemen, security guards, a medical team and a lot of people lined up outside of the Adidas store. After seeing a couple of posters we found out that Gilbert Arenas, a NBA player, was going to visit the Adidas store. I shuffled the boys away from the store since there were a LOT of people and I was quite scared that I might lose one of them to the crowd. Anyway, after lunch we got to about a foot away from him and I caught him on video! Here it is -

The boys thought that the experience was "Really cool Tita!" I was quite pleased with myself after that compliment. After that I left them at the SM Science Discovery Center. I had about 3 hours to myself and I actually didn't know what to do. So I went malling. I walked and zipped in and out of different stores. I've been so used to having someone with me whenever I go to the mall and the experience of just going wherever I wanted to go without anyone in tow was quite refreshing. 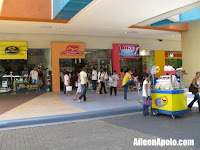 At some point, of course, my feet got tired. So I debated with myself whether I was going to go to the spa or get a magazine and hang-out at Kopi Roti. I did neither since Time Zone was just in front of me and the Simpsons pinball machine was beckoning me to play a couple of games. I indulged myself and was quite pleased about my game. My feet were still killing me after the game. I decided already on heading towards Booksale, but then the tram stopped right in front of me. So I jumped in and for the next 15 minutes I just enjoyed observing people walking around the mall. I think the other people in the tram found me quite weird since I was busy taking photos and I guess I looked pretty happy with what I was doing.

That 15-minute tram ride actually relaxed me a lot. After I got off the tram, I got a magazine at Booksale and parked myself at Kopi Roti. I bidded my time at the coffee shop before I went back to pick-up the boys. I had nothing to worry about anyway since they had a grand time at the center.