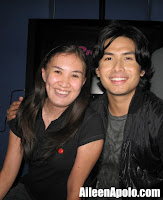 OPM stands for Original Pilipino Music and I have been pledging my undying love for it since I started this blog. Music actually seeded my friendship with Sweetie (yihee!). The first time I met him almost two years ago he was sharing his experiences about his website as a technopreneur. Who would've thought eh?

Anyway, we became really great friends when he invited me to attend Christian Bautista's album launch. It was really a surprise for me to finally meet someone who shared the same passion for Filipino music and well the rest is history. I've been tagging along in some of the album launches he's been attending (as PA! PA = personal angel hehehe) and I thought we'd gone full circle when we attended the launch of Christian Bautista's newest album, "Captured". Here he is singing the carrier single "The One Who Won My Heart".

I've been to a number of album launches, but I have to admit that I think I'll never stop being a fan and there are really a number of talented Filipino artists that deserve to be known and recognized, like Reuben Laurente. 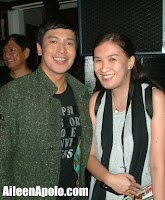 Reuben Laurente used to be part of a popular group, but he eventually decided to go solo. He also recently launched a new album entitled, "Heart Blends". I've heard so many good things about him, but it was my first time to hear him sing when we attended the launch at Hardrock Cafe. We missed a couple of songs, but luckily reached the part where he was singing really popular songs like "All at Once", "Could it Be I'm Falling in Love", and "Out Here on My Own". He also did a duet with Anna Fegi and I thought that their rendition of "I Honestly Love You" was pure, crystal and unadulterated. (I bought a CD during the launch and I absolutely love all the songs in it! I'm glad we went back upstairs to purchase a copy.)

Too bad though, Reuben's leaving next week to be a `featured artist' in a cruise and his album does not have a distributor yet. I'll check though where you can get the CD and will update this post once I get more info.