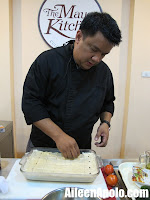 I was excited to attend the Greek cuisine cooking class at Maya Kitchen last weekend. Sweetie literally pulled me out of bed early Saturday morning to get me up and running haha. I didn't want to miss the class so I told him to wake me up by any means.

I arrived at the Maya Kitchen just a few minutes before Executive Chef Robby Goco (Cyma, Ristras, Go Greek etc.) started class. He started by teaching us how to make Baklava and while showing us how to make it he regaled us with stories from his childhood and how a 75-year old Greek taught him how to cook Greek food. I listened intently to everything he was saying and watched how he prepared the food since he didn't follow the recipe that was given to us. I tried my best to also write down the tips he was giving since I've never tried cooking Greek food. The baklava was served at the end of the 5-hour lecture and here it is. 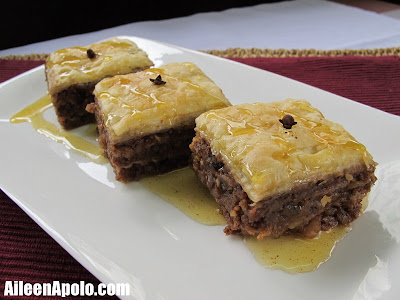 Chef Robby taught us a lot of recipes: horiatiki (Greek salad), spanakopita and spanakotopika, kotopoulo avgolemono (Greek lugaw), garides saganaki pasta, and the moussaka. At some point he started to multi-task and teach us three recipes at the same time! I had to keep asking Don for clarification because I couldn't catch up anymore. Haha. Anyway, here's some of the dishes he prepared: 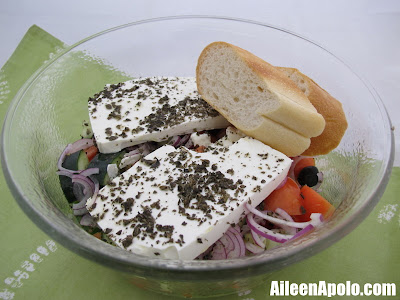 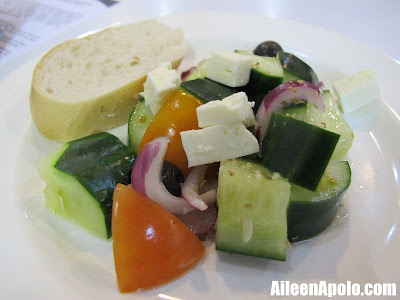 Horiatiki, Greek salad. I made a mental note to buy ingredients for this dish since Sweetie loves cucumber. It's easy to make, I think I'll just have a hard time looking for feta cheese (I'll probably use kesong puti in case I couldn't find any). [Update: I made this on Monday evening and Sweetie loved it]. 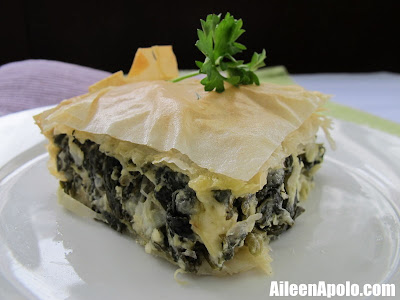 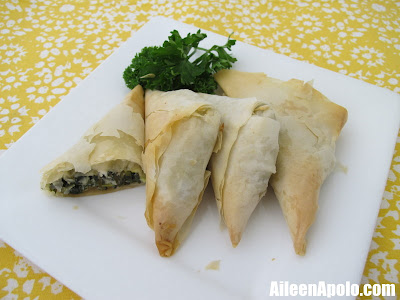 Spanakopita. When Chef Robby taught us this dish I realized that I still have a lot of cooking skills I need to learn. Spanakopita uses phyllo pastry and because it's very thin you really need to be careful when handling it since it tears easily. Anyway, I think I'll try making spanakotopika (smaller version) first before I do the big version. My inspiration when I make this dish would be Miguel since he doesn't really like eating veggies, but he actually liked this dish! 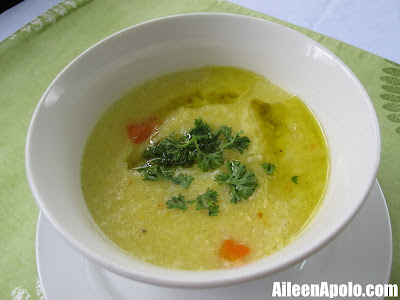 Kotopoulo avgolemono (lugaw). This dish takes time to cook, so this is where Chef Robby started to multi-task and taught us several recipes all at the same time. Thank God I oftentimes need to go through tons of data at work, so that skill kinda helped clear things up for me. I rarely eat lugaw and only like the one my grandmother used to cook for me when I was a kid. I liked the Greek lugaw too. 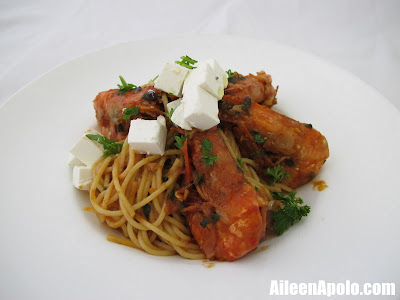 Garides Saganaki Pasta. I have yet to learn how to cook with wine and how to cook shrimps. Chef Robby though made it look easy to do so I'll probably try making this delicious dish someday. 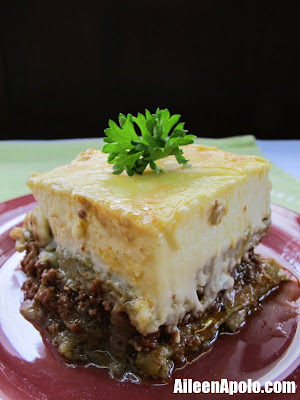 Moussaka. The first time I tried moussaka was in Boracay and I really liked it. The dish looks doable, but I think I would need about 3 hours to do it (Chef Robby prepared it in less than 30 minutes). I absolutely loved the bechamel sauce that he prepared and ended up sampling several teaspoons-full hehehe. 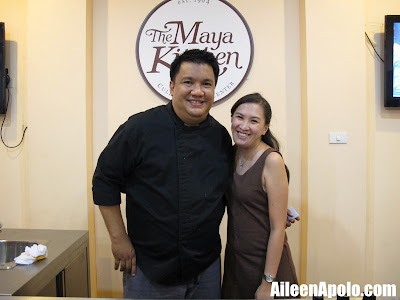 I love the fact that Greek dishes use a lot of veggies. Chef Robby mentioned that Greek cuisine is the most healthy of all cuisines. I learned a lot in his class and appreciate Chef Robby's generosity since he taught us a couple of other easy-to-do recipes. He was also very patient in answering questions and giving tips on where to buy ingredients. I'm definitely including the recipes for my dinner cooking (watch out for it on Mabuhay ang Bagong Kasal). 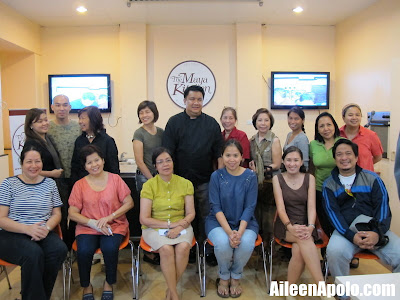