I really appreciate all the efforts the current MMDA administration has taken to inform us about traffic updates. Before we can only get traffic updates from reports on TV or radio, some local websites and the occasional SMS system. I only go out whenever I have meetings and absolutely abhor getting stuck in traffic. I immediately followed MMDA's beta Twitter account and was glad to see that the team was pretty efficient, albeit it's hard to search for info via Twitter. MMDA's mapped traffic info is heaven sent although they only have a web version for now.

Anyway, Michael Perez, Jay Quiambao and a couple of friends put together an iOS, Blackberry and Android app using MMDA's live feed, aptly named Metro Traffic Live. So it's easier to get traffic info when you're on the road. Pretty soon they'll also have it available for Windows Phone 7 users too. 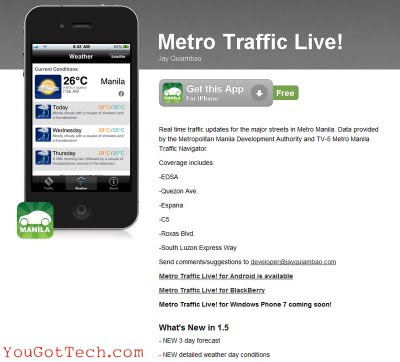 I wish though that our traffic authorities would cover more roads (especially Taft Avenue) since I also use the info to check my boys whenever they're stuck somewhere.
Ipinaskil ni Aileen Apolo-de Jesus sa 8/19/2011 06:00:00 PM