It was just by chance that Jay and I went to Divisoria last October. We brought Miguel to DLSU for his college entrance exam and it was just 7 in the morning. So we had a five hour wait ahead of us. With nothing to do we decided on a whim to go check out Divisoria.
Divisoria is a shoppers haven - for anything! Gadgets from China abound both the Divisoria Mall and 168 Mall. It is where budget brands like Cherry Mobile, Torque and MyPhone are given a run for their money. So in short, gadgets are not only affordable in Divi, they are cheap!
So Jay decided to check out the rumored iPed, a China-made Android tablet. We found a stall at 168 Mall (in front of Get Laud near the food court) that sold various gadgets and they had on their display 2 Android tablets -- 7 and 10 inches. They cost PhP3,300 and PhP5,200 respectively. And for an additional PhP1,000 you can get a keyboard (with case) for the 7 inch tablet. 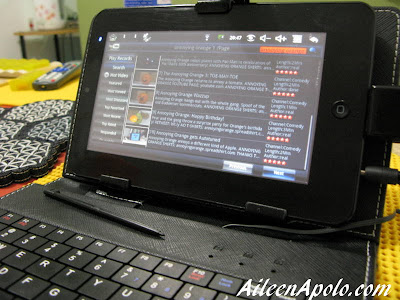 So does it actually work? The sales lady showed off the tablet to us by jumping from one app to another. She showcased the camera, played a video and a game and showed the office app. She couldn't demo going online since there wasn't internet connection but mentioned that using Globe Tattoo worked.
We went back to Divisoria last weekend and Jay decided to purchase the 7 inch tablet with keyboard. He got it for PhP4,300 and he's so far enjoying it to browse and watch Youtube videos.
For the specs and our initial review please visit You Got Tech.