Onboard the USS Blue Ridge

My father-in-law served the US Navy for two decades and their love story revolves around the different ships he served because of all the transatlantic love letters between him and Mom. The USS Blue Ridge, a combat and communications ship of the United States, was one of the ships Dad served (1975 to 1978). 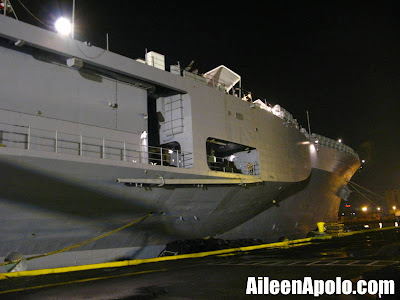 This is just about a third of the USS Blue Ridge. 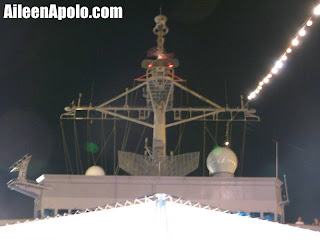 I've never been on a huge ship, so I was pleasantly surprised when I received an invitation from the Ambassador of the United States of America, Harry K. Thomas, Jr., and the Commander U.S. Seventh Fleet Vice Admiral John M. Bird, for a reception onboard the USS Blue Ridge. I was extremely excited and immediately did a Google search to learn more about the ship and asked Sweetie about the time Dad served the ship. Apparently Dad was onboard the ship when the USS Blue Ridge was sent to Vietnam for a rescue mission and this historical event is documented in a yearbook (which Dad has a copy of). 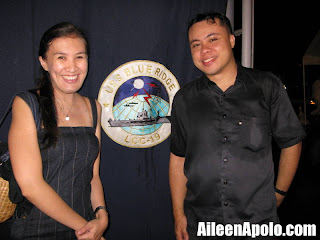 It was raining when Juned, Fritz and I arrived at the pier. Security was tight so we had to walk across the pier to the reach the ship since the cab wasn't allowed to get in. We waited a bit in the holding area and a few minutes later we were joined by Nina. Sweetie was in the next tent with his colleagues. We were all raring to board the ship and quickly crossed the last strip of land with gusto (also because it was raining).

I didn't really know what to expect. I went through photos of the USS Blue Ridge on their website. The last ship I've been on is the tiny Super Ferry from Bohol to Cebu, so this was really a rare treat. We were welcomed by officers of the ship and were escorted to a lounge. After a few minutes we were allowed to go up the deck. 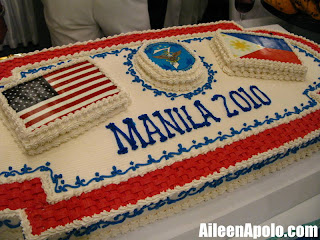 As we exited to the deck we were welcomed by USS Blue Ridge Commanding Officer Rudy Lupton. The tent was filled with people from different sectors of society, politicians, government officials, military officials, musicians, hoteliers, businessmen, media etc. etc. plus me and my blogger-friends. It was an overwhelming and exciting experience and I just happily observed and hoped my sea-legs would hold up (I think I was the only one who felt the ship rock). 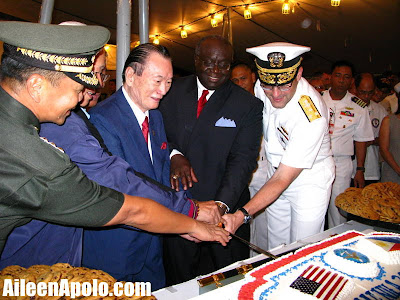 Too bad we were not able to tour the ship, but being on the deck and experiencing going through the maze of hallways and stairs was more than enough. I must say the food was also awesome and one thing that we'll never forget is the "as good as grandma's/Mrs. Field's" cookies (Fritz said that they probably have a grandma somewhere in the ship baking cookies!). 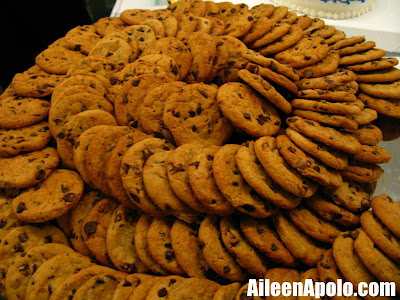 I can't stop thinking about these chocolate chip cookies!
The USS Blue Ridge will be docked at the Manila Pier for about four days with its crew doing some outreach activities (i.e. Gawad Kalinga, Habitat for Humanities etc.) and of course, liberty!

My heartfelt thanks to the United States Embassy for the invitation. I had an awesome time. =) 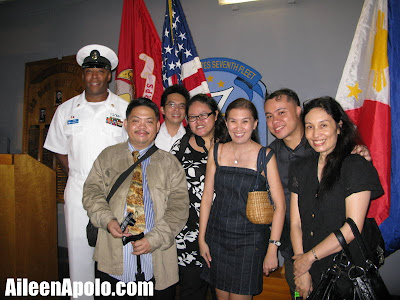