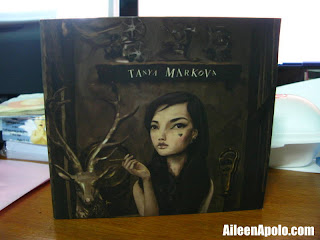 I found a copy of Tanya Markova's self-titled album on Sweetie's desk last week and thought I'd listen to it. I learnt about Tanya Markova from my rocker-friends, Karla and Sha when they started singing "Picture Perfect" during a mapping party.

I slipped the album in my CD drive with some apprehension. I was expecting that it would just give me a headache and bust my ears (haha). I was dead wrong. I actually liked it and copied a couple of songs into my iTunes so I can listen to it anytime.

It's been sometime since I heard a local band come out with original songs and I guess that's one reason why I liked Tanya Markova. The last time (I think) I heard something "new" was when "Parokya ni Edgar" was launched. I hoped that Tanya Markova's "Picture Perfect" wasn't a one-hit wonder and I'm glad to share that they have other songs in their album that would hook you in.

Tanya Markova's songs are easy to sing along with and the songs I love most include, "Linda Blair", "Disney", "Bye Mosquito" and "P.A. Roadie Fernandez". My favorite song (aside from "Picture Perfect") is "Linda Blair" because the beat is just so cute and kulit. There were some songs in the album that were a bit hardcore head-banging songs (okay so I'm kind old na), but generally I loved the album and have recommended friends to buy it to.