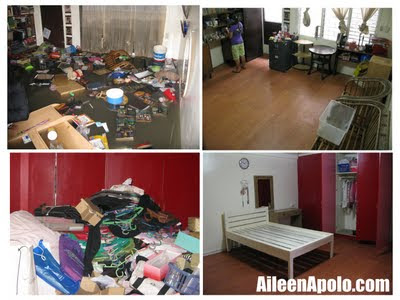 Before and After
It's been a week since the Ondoy struck us here in Manila. Another typhoon, Pepeng, is currently wreaking havoc in Northern Luzon. I pray that the families experiencing Pepeng's wrath would be okay. I hope they managed to prepare for the worst.

I've been swinging between being happy and sad the whole week. There would be days I would be perfectly fine, even managing to work a bit, but there would be days when I feel like I'm still in chest deep water screaming for help.

I found solace in the people I met in Iloilo early this week. They experienced the same thing when typhoon Frank flooded Iloilo July last year. They have since moved on. My dear friend, Mabel has since given birth. She was 8 months pregnant with my godchild when their house was flooded to the roof. She doesn't remember how she managed to get up to the roof. She gave birth about two weeks later with some complications.

Seeing Kyen-Kyen reminded me that there would be life after this disaster. The bundle of energy my friend struggled to contain when we were having merienda brought me hope. It took awhile but after chatting for awhile my godchild started playing with me. And that's how things will probably be. It's going to take awhile before I'll be back to my usual self, but I will get there, hopefully sooner and not later.
Ipinaskil ni Aileen Apolo-de Jesus sa 10/03/2009 09:03:00 PM