Swing Out Sister Live in Manila: A Beautiful Mess

A few weeks ago Sweetie excitedly told me about the concert of the Swing Out Sister. I've known SOS since I was a kid and remember my classmates dancing to the tune of "Breakout" (remember those P.E. classes where we always, ALWAYS had to dance?). Anyway, Sweetie wanted to watch so we immediately got tickets. I was looking forward to it since it's been a long time since I watched a concert of a foreign artists - the last one I watched Ricky Martin was just 12 years old (guess who they were... the Menudo! LOL).

We arrived early so we won't have trouble looking for seats and ended up waiting a good two hours before the show started. The show started at 8:45 p.m. with Faith Cuneta as the front-act. We thought that she was going to sing just 3 songs, but she sadly announced that she was tasked to sing for 30 minutes. So, the audience politely listened to her while she was doing her arias err... birits (which I think was really uncalled for). Her most applauded song was her last song. You-know-why. 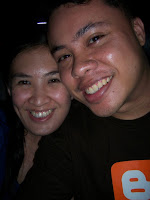 So we were all at the edge of our seats awaiting for the band to come out, but we were made to wait another 30 minutes. People started to bang the back-boards at the general admission area, others sounded like they were stomping their feet and some where already whistling. I was getting restless and cranky myself since: (1) the show started 45 minutes late and (2) I think the SOS did not need a front act (did Toto have one?) since I'm sure everyone was raring to hear them already.

The band members did a little act when they went up on stage and we were wondering who they were and then Corinne Drewery appeared. The audience cheered. She opened with the song "Surrender" and sang a number of songs from their new album "Beautiful Mess" and songs they've popularized through the years. I was awed with her voice. It has not changed through the years and she never failed a note. When she sang "Forever Blue" she mentioned that it wasn't really in their line-up, but since a lot of the people she met here in Manila mentioned it they decided to sing it (Sweetie said that the song was very popular here and not in other countries). Corinne also said a few phrases in Filipino like "Salamat po", "Ayos ba kayo diyan?" and said that she loves the Philippines because of the warm weather and people.

The band exited just before the final song and Corinne reappeared wearing a styled barong (Sweetie said that she's a designer). I was surprised. It was the first time that I saw the barong worn that way. I wonder if it's going to be picked up by the local designers? Here's a glimpse of it - 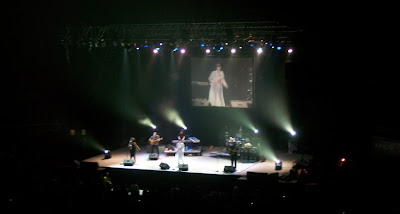 To build expectation the guitarist and drummer did a little show before they eventually started the intro for Breakout. It was a really, really long version and if you care to watch a bit bouncy video (sorry, we were standing and very excited) here it is -

Thanks to the Swing Out Sister band for coming to Manila, you may my Sweetie very happy!

To Ovation Productions Manila, thanks for bring `em but I do hope next time: (1) You choose a more appropriate front act (you can actually do without one); (2) Having your name mentioned again and again during the front act is tacky; (3) Do not let the audience wait too long, we paid to watch a concert and not waste our time waiting; and (4) Make sure you set up the instruments properly. It was a good thing that despite the mess, SOS is such a beautiful and graceful guest.
Ipinaskil ni Aileen Apolo-de Jesus sa 4/09/2008 10:25:00 PM