One thing I love about Washington and spending time with my sister is going to museums/exhibits. The last time I visited her (a loooong time ago) I managed to visit a number of museums including the Museum of Natural History (I loooove the dinosaurs), Air & Space Museum (I’m a fan of the Apollo 11, I wonder why…), and a couple of other cool tourist spots such as the catacombs of a church, the Washington and Lincoln Monument. I have a lot of photos of those but I’m too lazy to scan them and I really don’t wanna show how I looked when I was a kid with bangs, braces and short hair.

I had a very short, but fun-filled visit with my sister. We packed everything in just 3 days. And considering that I haven’t seen her for about 5 years, it’s really great that we didn’t drive each other crazy (and I didn’t drive my brother-in-law crazy too). Anyway, I digress. So, off we went on an adventure by going to the Bodies exhibit. I had to be the navigator (it’s much easier to navigate in Washington than California believe me). 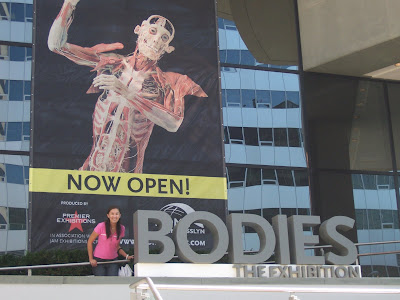 So what was in the Bodies exhibit? BODIES. Literally. It basically showed human bodies, processed and preserved to show it’s full form inside and out. The photo doesn’t do justice to what you would actually see in the exhibit. 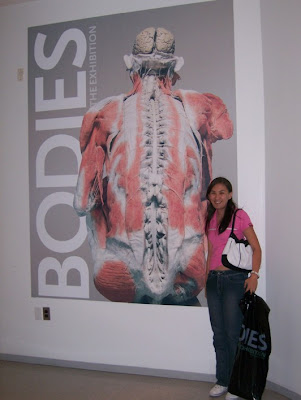 What was remarkable was seeing a full-body skeleton holding onto the fingertips of a full-body muscled being. The guide said it was actually the same person – his skeleton and his muscles. Then there was what we thought to be leather, but was actually skin laid bare on a metal bed (thank God there was glass covering it). Then slices and cross sections of bones, lungs, the heart, the digestive system, arteries and veins which looked a lot like roots/corals, fetuses, bones of a fetus, etc. The muscles looked a lot like meat and beef jerky. Diseased lungs looked definitely gross, all-blackened up and way smaller than a healthy pair of lungs.

Weird? Creepy? It was definitely freaky, but fascinatingly so and educational. I didn’t feel quite comfortable knowing that the display were actually people. Well, the guide said the bodies were either donated or unclaimed ones. (Gives me the shivers thinking about how they must’ve lived before ending up in an exhibit). Unfortunately we weren’t allowed to take photos inside the gallery, but I could say that the exhibit met it’s objectives with me by reminding me that I should exercise! 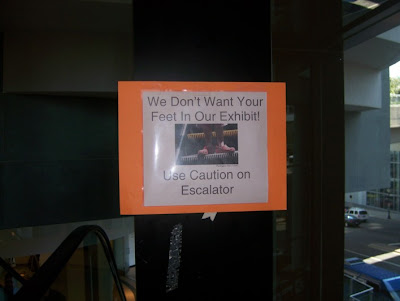 The Bodies exhibit will be open until October 14 in Washington, D.C. Go check out their website, it’s supposed to be going around all over the world.
Ipinaskil ni Aileen Apolo-de Jesus sa 9/27/2007 08:30:00 AM