The Right to Suffrage 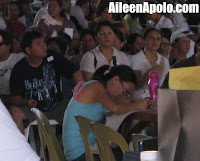 You know that people want change when you see them endure 2-3 hour lines just to vote. That is my story today and the story of millions of other Filipinos.

Long Lines due to Clustered Precincts

I was voter #489 in my precinct and that accomplishment took 3 hours under the scorching heat and I only got to sit down 15 minutes before I casted my vote. The only thing automated in this election is the counting. The long lines was caused by the clustering of 333K precincts to 76K precincts, thereby increasing the number of voters per precinct by 400-500%.

Confusion in Clustering of Precincts


And as expected the clustering of precincts caused a lot of confusion. There were a couple of people who went to the polling center, lined up for hours only to find out that there precinct was re-located to another polling center. There was also a number of people who were surprised that they were unlisted so they were not able to vote.

Even with the ballot secrecy folders there was no such thing as keeping your vote secret since those lining up and those seated beside you can see who you are voting for. We all saw this on national TV when media took shots of former President Erap while he was feeding his ballot to the PCOS machine. When are we going to move away from ballot secrecy folders?

There has been a lot of talk about disenfranchisement of voters because of these problems. These problems could have been easily avoided with proper definition of the process flow and use of technology (that works). Plus I hope next time the groups involved in hosting the elections should be more open to the help being offered by citizens. After all we all want this to work.

It is heartening though to see how my fellow voters endured the heat and the long line just to vote. So was it worth it? All the confusion, the inis, the hilo, the craziness was worth it because I am proud to say that I exercised my right to vote. Next time though I hope they can make the "bilog na hugis itlog" a bit bigger since I had a hard time shading it.

Someone took a video of me when I was waiting for the confirmation message of the PCOS machine. Congratulations to all those who voted!