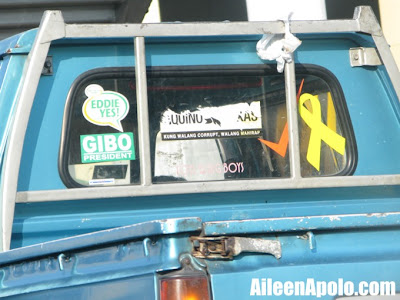 I excused myself after dinner and left the boys to clean-up so I can spend some quiet time to think about who I would vote for tomorrow's national and local elections. I decided to keep mum about my choice because I wanted to focus my energy on some projects that I hope would help our electorate.

My bets in the last 2 presidential elections lost. Both my choices would've made great presidents. They were great statesmen and would've served our people well. Too bad the progress we were experiencing back in the 90s have gone awry in the past decade. And I always wonder what could've happened if those I voted for won.

No use in crying over spilt milk. The only way to go is forward and I am ever hopeful that we will move forward if we all get our act together and serve our nation. My hope is alive because I have seen the Filipino bayanihan spirit make its presence several times. Noteworthy were "Ondoy" and now through citizen election monitoring and mapping of precincts.

Tomorrow is THE day and we all must be vigilant. Here's a way you can send in reports via SMS, email or web about irregularities in your precinct/area: