Part 1 of this post can be found at this link. 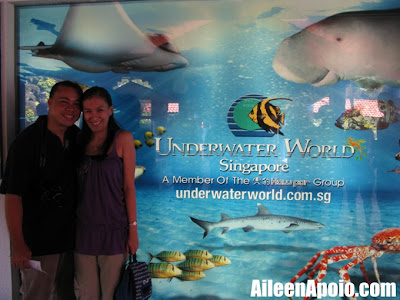 So off we went to our honeymoon. My colleagues said that we should not consider it as our honeymoon because I was in Singapore for work. Sweetie saw more sights in Singapore than I have in the past 9 years that I have been going back and forth there. The only decent photos we had in Singapore were taken in Sentosa (because Jajah showed us around) and at the office (because my colleagues insisted on taking our photo). 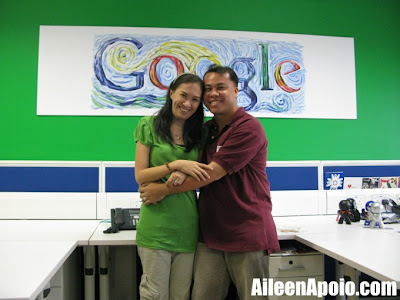 We were both very busy on our first monthsary. We were off early in the morning since I had a number of meetings in the Metro and Sweetie also had to go to Marikina. He surprised me though in the evening with some white roses. 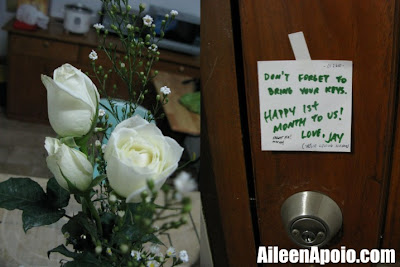 I am terrible with keys so Sweetie left me this reminder on the door.
I actually did forget to put it in my bag.
"Naparami ata kain ng Mister ko ah." I said to Sweetie earlier. He replied by saying, "Masarap luto ng misis ko eh!" We simultaneously cringed right after and burst out laughing. "Ang jologs!" I said. "Let's not do that again" Sweetie replied, still cringing. LOLz!

I realized after we finished giggling over our exchange that gears changed when we came home from Singapore. It was the time that we had to face our new found household chores full throttle.  It was a good thing that Samsung managed to repair our new washing machine, but we honestly started washing our clothes only after my Mom's helper laundered the 2 maletas worth of trip clothes (hehehe). I had to learn how to iron and poor Miguel's uniform became my practice ground. I can attribute my ironing skills to how-tos from Youtube (thanks Youtube!). 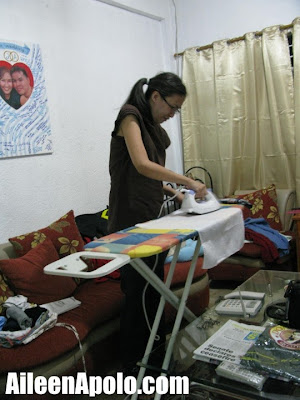 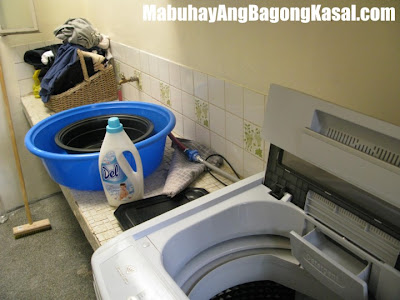 The leftovers were long gone and I had to learn how to cook. Good thing my high school, St. Scholastica's College, taught us how to cook and bake so I kinda knew stuff in theory. And thanks to Google and Youtube and Plurk/blogger friends (and my Ate!) I didn't have a hard time putting theory intro practice. I learned how to slice the hard way though and ended up having a couple of cuts on my fingers (OUCH!). Here are some of the dishes I've learned how to cook: 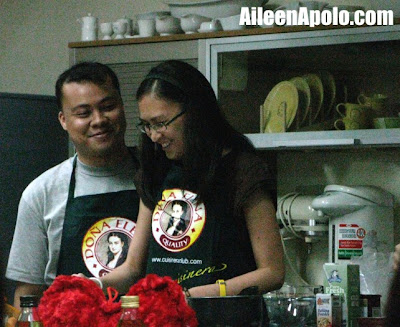 This was at the Dona Cuisinera Club cooking demo. We were
chosen to help out the chef because were were newlyweds. Our photo
has been featured in a couple of newspapers. (Thanks to Dona Elena
for the olive oil and other food stuff!!!) 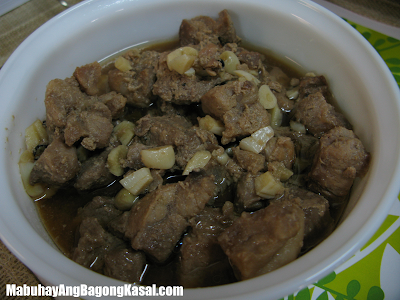 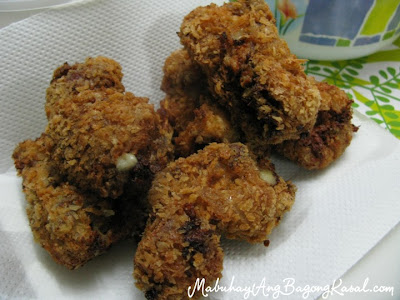 My regular dishes include: adobo, cheese & ham stuffed pork roll,
fish fillet, beef bulgogi, beef/pork steak, afritada, spaghetti, arroz
ala cubana, sinangag, potato salad, coleslaw and the Dona Elena
arugula salad. I'm still struggling with the Mee-goreng!
I miss baking though and I hope I'd save enough money by month end so I can get myself a convection oven. One good advise we got before our wedding was from my high school friend, Ottie. She said that when she got married they didn't prepare their new home before they moved in. They got married on the 30th of December and went home on New Year's Day. They didn't have a refrigerator and it took 2 weeks for the appliance store to deliver because of the holidays. We heeded this advise and bought a refrigerator and washing machine a week before the wedding. It was really sound advise since we really needed the ref when we moved in. My Mom's long-time carpenters also helped us a lot in prepping up our new home. 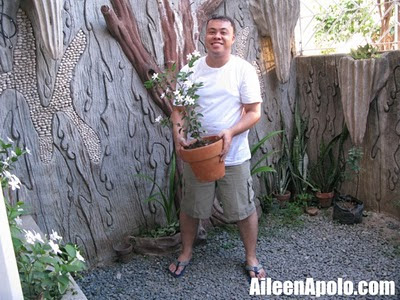 Sweetie during our gardening session with my Mom.
When we got engaged we had to sacrifice the time we spent attending events. We didn't attend any for about 6 months since planning our wedding took up all of our free time. Eventually we realized that we had time to attend some events again and see our friends and do roadtrips on weekends. 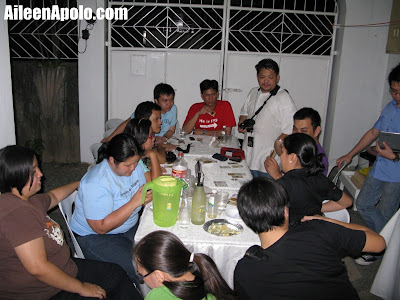 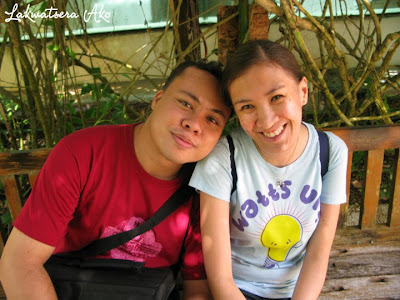 Since Sweetie moved 25 kilometers from where he used to live (Marikina) and I just moved about 7 streets away, I had the pleasure of introducing Sweetie to Paranaque and my hommies (err my childhood friends) and my Parish. He probably didn't see it coming, but he is now part of our Parish choir (hahaha). 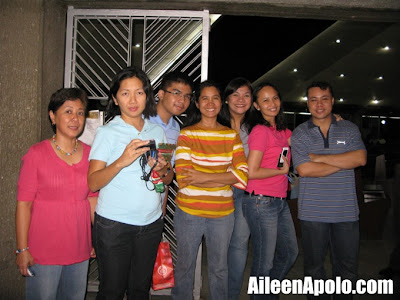 We had quite a number of challenges too in our first 100 days. We had to get rid of pests. Figure out how to keep the basura (trash) safe from being scavenged by cats/dogs/humans. Find ways how to fix up our tiny place and cope with stuff we didn't have yet. Prepare for parties (we've had two so far). Entertain unannounced visitors. Smokin'sinks. Septic tanks (euwwww). And there were bumps along the way that we faced together.

So it's been a 100 days and it's been an eye-opener about what marriage is all about. I honestly didn't realize though that chores are bottomless. I am thankful that Sweetie has been really supportive and patient the past few months that I've been learning how to cook, iron, do the laundry, clean the house etc. etc. (I'm an expert at washing dishes haha). I remember asking him one night a few weeks ago if he could still imagine himself sleeping alone in his old room (because I didn't). He said that he'd gotten so used to having me beside him (even though I sometimes accidentally kick him), he couldn't imagine himself being alone.

And that's what I learned the first 100 days as a wife. I am not alone anymore.

Email ThisBlogThis!Share to TwitterShare to FacebookShare to Pinterest
Mga etiketa: better to be single or married, marriage, married life, single vs. married