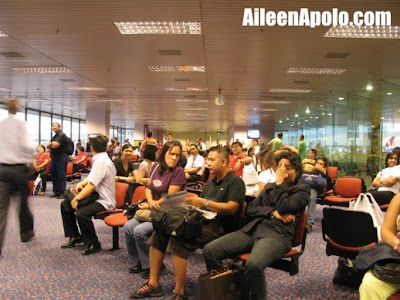 If you are a frequent traveller you'd probably wonder why the flight number has 4 numbers instead of just 3. The flight I was in last Sunday (PR 508) got cancelled after 3 hours of being stuck on the tarmac of Changi Airport.
I normally doze off even before the plane takes off, so when the plane backed up and stopped a few meters from the gate I just ignored it and settled down for a nap. I heard the pilot say before I fell asleep that he wanted to have something checked before we took off and that we shouldn't worry. After awhile the pilot announced that something was wrong with the hydraulic system and that were trying to source for a part in Singapore. After my head-banging Cebu Pacific experience back in 2007 I knew this issue was going to take some time so I went back to sleep.
I woke up an hour and a half later and was surprised that we were still at the tarmac. The pilot made an update and said that they were still sourcing for a part and apologized for the delay. Some of the passengers got off the flight and probably took another flight since they had connecting flights in Manila they had to catch.
After two and a half hours in the plane we were served "lunch" and eventually we were asked to disembark. I had the sinking feeling that I wasn't going home that day. We were then told at the gate that the spare part was going to arrive by 11 in the evening and that the flight was re-scheduled for 8 in the morning the next day.
Some of the passengers were angry and demanded for compensation, others were excited about the prospect of staying another night in Singapore and planned their evening. I just resigned to the fact that I was stuck in Singapore for another night. Besides it's better to be stranded that to be on a flight that might be headed for disaster.
I think though that the situation could've been handled by PAL better. The flight crew were quite gracious answering all the questions and tried to make everyone comfortable, but the transit to and from the hotel was just crazy and stressful. I did not even see a PAL representative at the hotel. Drew's suitcase almost got left behind because there wasn't really anyone in charge. We decided to take a taxi instead of the bus because of this.
The 8 a.m. flight was again delayed by an hour and half because they had to do further tests on the repair and it was quite scary since we could hear the testing and it seemed like it wasn't working properly. I barely slept on the flight home, but I felt quite safe since PAL pilots are known to be the best ones.
Ipinaskil ni Aileen Apolo-de Jesus sa 4/29/2009 06:16:00 PM