Aiza, a Funny Man and West Side Story

I tagged along with Sweetie for a couple of music events in the past few weeks.

1. Aiza Seguerra's launch of her international album, "Open Arms" at Eastwood. The album was recorded in Singapore and remastered in Japan and has been launched in a couple of Asian countries. Great album to buy since Aiza rendered a number of great hits as an acoustic version.
2. West Side Story. I thought I'd never get to watch West Side Story since it was already on the last weekend of its run, but lo and behold the Sweetie managed to get us tickets! West Side Story is one of my Mom's favorites and she always used to watch the film (on VHS) when I was a kid. And who can forget "One Hand, One Heart", an all-time favorite wedding song that our choir sings? And "I Feel Pretty" and "Somewhere"? I was in heaven the whole play especially since it was Joann Ampil who played Maria. And "Tony" was indeed a role made for Christian Bautista.
Oh and after watching West Side Story I bought a copy of "Kumpas", an orchestral celebration of Pinoy Rock music. The main reason why I got it was because Ely Buendia was featured for the 7-minute orchestra version of "Ang Huling El Bimbo". 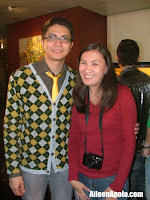 3. I also got to watch Vhong Navarro and the Streetboys perform live during the launch of their album entitled "Let's Dance", a dancexercise instructional audio-video CD. I must say that dancing is one talent I do not have! BUT it's exercise that I need and after watching the Streetboys teach some veteran reporters do the "Hustle" I think maybe, maybe I can manage module 1 with Miguel (with doors locked `kay!).
And a super belated post about MYMP. 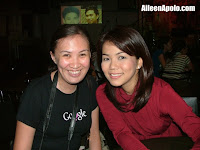 After a long-hiatus, MYMP finally launched their newest album, "Now". They mentioned during the interview that this album had more of a "country feel" and "Now" is n original song penned by one of their friends.
And looking at my CD-cabinet I could proudly proclaim that I have all of the albums of MYMP heh.
And since we're talking about OPM, I hope you guys can also check out "Scholars Sing Cayabyab". Bugoy's song, "Paano Na Kaya" is very sincere and he rendered it really, really well. I hope my neighbor doesn't mind that I usually leave the song playing again and again the whole day. (I wonder where I'll get the chance to have a photo-opp with Bugoy).
Ipinaskil ni Aileen Apolo-de Jesus sa 10/20/2008 08:21:00 AM