Kwentong Kutsero: Stir or No Stir? 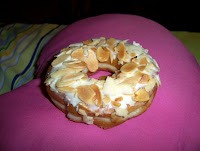 I woke up a bit harassed, tired and not feeling well this morning. I would've wanted to take the day off and get some rest but I had a scheduled speaking engagement at DLSU (my alma mater!) and I had quite a number of deadlines to meet. Still a bit groggy I got out of bed and dragged myself to take the 7 steps to my study room (look Ma still in PJs!).

The one hour I had wasn't enough to go through all my mail and I had to rush off to DLSU for my lunch with college buddy and thesismate, Jingo Badillo (who's DLSU's marketing director now). I scheduled a lunch with him to confirm his announcement that he's quitting his job to enter "Ang Bahay ni Kuya". Ever the prankster... stir or no stir? A definite stir!

Since I was running late for lunch with Jingo (everyone calls him Jingo, but I call him Johannes) I was forced to take one of the private car cabs outside our village. Exiting the Nichols tollgate the driver asked me what year I was at DLSU. I was wearing a white blouse and jeans and a white headband and was carrying my backpack office... he thought I was still a student! LOL. Now that's what you call stir.

The driver went on and divulged his love story to me. Why? I don't really know. Anyway, he said back in 1967 he accompanied his girlfriend to Manila from Batangas. When he arrived back in Batangas he was forced to marry his current wife. The marriage was arranged from birth. He didn't have much choice he said. His grandmother was formidable and at that age you really couldn't do anything he said. Eventually he fell in love and courted his wife and had 6 kids. All of whom are very successful managers and businessmen. And his ex-girlfriend? He said he still thinks about her since they never had closure.

That story, what was quite disconcerting was his kwento about giving his son a van for his daily transpo to school, shelling out 5K every week to his apo based in Bacolod, buying his granddaughters PhP250 worth of merienda everyday, giving PhP200 allowance to his first year high school apo everyday. If he was that rich, why was he driving me to DLSU? Stir or no stir?

Oh well... what a weird, weird world.
The doughnut (yes that's the real spelling of donut according to my grade 3 teacher), is the yummiest donut I've tasted ever. It's got almond chips on top and can be found at J.Co, a coffee and donut shop, in Jakarta.
Ipinaskil ni Aileen Apolo-de Jesus sa 3/02/2007 08:13:00 PM