A Starry Day in the Life of a Music Media Technopreneur

I've been experiencing quite a lot of new things lately. The other day my friendly friend Jay invited me to tag along in an album launch. Since I love OPM I agreed to join him and be his PA for the day. I thought it would be interesting to experience what a music-media person does.

So, off I went to ABS-CBN and waited at Starbucks. I didn't expect that I would be stargazing even before lunch. Jay arrived and off we went to Club O (formerly Dish), venue of Christian Bautista's "Live Christian Bautista" album launch. I got the album a few weeks ago and I most certainly enjoyed it. I thought it was very charming that the Nina Live album would be followed by Christian Bautista. Most certainly a good choice (but I really wish they'd produce a duet album of Nina and Nyoy).
I told Jay that I'd probably get starstruck and I'd be a useless PA. I warned him that if I start he should just put a paper bag over my face. Well, good thing I got over it and managed to put on my "corporate" poker face. I joined the media people in the interview room and I just observed the reporters interview Christian. There was the usual questions on how the artist felt while doing the album, tsismis, intriga and more showbiz questions. It was flattering that some of the reporters thought I was a writer. Some of them even gave me tips on how to interview. 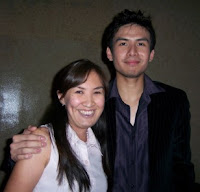 After Christian sang some of the songs in his new album (including my favorite "You"), I summoned myself to approach him and get his autograph (yeah, yeah I know it's baduy, eh fan ako eh, bakit ba) and, of course a picture! My legs were shaking so badly after that encounter. Isa akong starstruck fan! Hehehe. I walked away fast, worried that I might start hyperventilating and make a mess of myself. Haha.
After that I remembered I was a PA for the time-being and assisted Jay in taking Christian's photo. I got up the nerve to ask him if he uses Google and he said yes. I think that was so much of a left-field question coz he looked at me strangely. So, I introduced myself and gave him my business card (in case he'd want to have his website marketed).

Went to my meetings in the afternoon and was supposed to go home already, but new found friend Cecille invited me to join them in Rachelle Ann Go and Jimmy Marquez' album launch at Mugen Bar, Metrowalk. So, I went with them since I'm an OPM fan and I was curious who Jimmy Marquez was. And lucky me! I won a t-shirt!!! 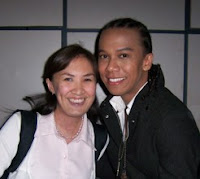 Jimmy Marquez was a runner up in ABS-CBN's Star in a Million. I remember voting for him as well since he was really good. I got both their albums at the venue and most certainly liked Jimmy Marquez' "I was Looking for Someone to Love". I hope VIVA Records supports him more coz he's a very talented and sweet person.

Rachelle Ann was also cool, very warm and bubbly. Her album's very interesting compared to the first one and her singing was superb and full of emotion (siguro dahil in-love! swerte naman ni Papa Christian!). The tracks in her new album are interesting and showcases her voice range. It's a wonder how she did sang the high notes while seated. It's talent! 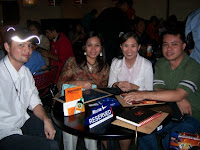 I was exhausted by the time I got home. It was more than a day with the Stars. It was a day in the life of a music mediaman. As always, I worked when I got home and Jay, the not so DJ, was also working on the stuff he got from the launches. And what's great about the day, was meeting new friends, Cecille, Ginnie and Victor. At last I have friends who love OPM too. :)
Ipinaskil ni Aileen Apolo-de Jesus sa 1/24/2007 11:39:00 PM