Did I? Didn't I?
I didn't.
New found friend, Jay invited me to witness a pizza eating contest - him vs. Chel. They wanted me to join in, but I declined since I had a meeting to attend after (I was afraid I'd eat so much and feel sleepy). 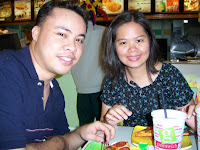 Anyway, here they are before they started eating pizza, pizza, pizza and more pizza.
Well, I guess they should've gone earlier. They went to several branches before they called me up to ask if there were any branches in Makati. (My friends usually use me as their Yellow Pages). So, I texted LUK4 BIZ GREENWICH, MAKATI, sent it to 2851 and I got the Greenwich branches in Makati. (I haven't lost my touch!). I tried calling the Park Square branch, but they weren't picking up the phone. I tried the delivery hotline, but it was taking so long. So I just called Jihan to ask where the branch was in Park Square. Well, I could say, she's the best map I've ever consulted (tsk tsk tsk). Anyway, so off they went to Park Square from Waltermart. I was at Glorietta killing time for my next appointment, so I joined them to be the referee. 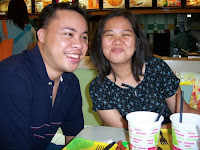 The most number of pizza slices I've ever eaten is... 7! It was during Eddie's birthday bash at Pizza Hut back in college. Pizza Hut then had an eat-all-you-can promo and the boys forced me to eat all seven slices (crust included!). I don't remember how I managed to get back to school... I probably crawled. Well, Jay and Chel need a re-match coz it was a tie. They ate a measly 5 and a half slices. The last slice came from me and they shared it. Well, I hope Chel wins in their re-match (ha-ha-ha)!