I got sick and after reading the blogging attempts I did early this month I decided to rest and just re-start the challenge when I felt like doing it. My target was to start again on January 15, but I had a relapse over the weekend and had to use all my energy for our quarterly review. I survived the review, but hope I did not infect anyone else. Saw my favorite EENT right after my last review and he ordered me to take at least one day rest.

So yesterday I rested and as the day progressed I started to feel really sad that I've been sick for more than a week already. I was also sad because the doctor gave me antibiotics again. I know I need it to get well, but I was hoping I wouldn't need to drink antibiotics for several more months. I know that worrying is very unproductive so I took the time to sleep to help heal my body. My brain was also having a hard time anyway figuring out a new assignment that was given to me.

I was still sulking by evening and was quite masungit to my boys. I wanted to work on some projects but my body wasn't cooperating. Past ten in the evening I received a message from Phil about the fire that broke near our place in Paranaque. I immediately checked for news about it to identify the area. I realized that it's quite hard to get the exact area from Twitter because they usually just state the general location. I was starting to panic because the areas were near our place. 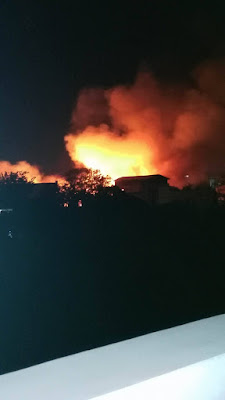 Photo by Myra, our neighbor.


After scouring through tweets I finally found the correct area that was on fire -- Sitio Pag-asa, Barangay Sun Valley. I immediately checked the map to see how near/far the area was. It was very near. I kept telling myself, DO NOT PANIC. I then checked on my Mom to see if they already knew about the fire. They did and they said that they could hear explosions coming from it. My neighbors who were chatting on our FB page also indicated that there were many explosions coming from the area. I then informed my other neighbors in Sun Valley about the fire. 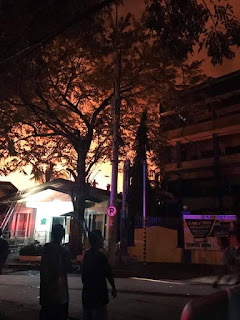 Photo by our neighbor Daisy M.

The alarm was eventually set to 5. I did a bit of research to understand better what the alarm levels mean. It's mainly about what level of authority will be in-charge of the situation according to the Bureau of Fire Protection. Because it was already level 5, fire trucks from all over Metro Manila came to respond. Ate Luz said that there was a firetruck already in our street which is about a kilometer away from the fire. I really truly appreciate the hard work the fire fighters did to protect everyone and save properties.

According to GMA the fire was controlled at 12:07am and it was out at past 1 in the morning. Sixty houses and 150 families were affected by the fire. There were no casualties reported (thank God!). The fire hit very close to home. It was just a kilometer away from my home and my Mom's home. Being far away the only thing we could do is to pray that the fire fighters could put it out as soon as they could. I also took it upon myself to find accurate information to share to my family and get as much info to assuage my fears.