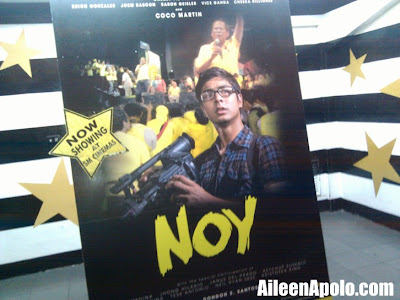 It isn't a date movie, but Sweetie and I (in one of the rare times we watch a movie) went to see it on a lazy Sunday evening. We were curious and originally thought that the movie was all about President-Elect Noynoy Aquino, but when we watched the trailer and read the synopsis on the "Noy the Movie" website it was about the struggle of "Noy" (played by Coco Martin) to earn a living for his family.

The disparity of how the two "Noys" lived their lives struck me. One lived in truth and lived for the truth, the other lived a lie to live. Noy pretended to be a journalist to earn a living and followed Senator Aquino's campaign trail. He was in it for the money only and only when Caloy (Baron Geisler) pointed out that his work did not have any soul in it that Noy started thinking about what he was really doing.

Caloy further questioned Noy on his motivation for work. Does stealing because you are hungry mitigate the sin? Does selling drugs lessen the crime because you did it for your family? Do you just do things for your own family? Why don't you help others? Noy didn't get what Caloy said and answered back by saying he was weird.

That was the turning point of the movie and I would like to believe this period in our history is also a turning point for all of us. Truth vs. lies. Light vs. darkness. Progress vs. retrogressing (again). The last part of the movie showed how Noy's character evolved and how he tried to right things as one person. Lies to truth. Darkness to light. Retrogressing to progress.

The movie reinforced my belief that it will not take just one man to change our history. We all have to take part in it. "Noy the Movie" is definitely not a date movie (I didn't expect it to be), but I'm sure glad that we watched it instead of the other movies that were available because I felt that it was a good reminder on what we should do as Filipinos.

And yes, I cried at the end.