A week before my 8th birthday Ninoy Aquino was assassinated at the airport tarmac. There was a lot of discussion about it and eventually my Dad became part of the commission that investigated the tragedy. I did not understand what was happening back then, but my parents explained that important things were happening in our country and that they were hopeful that the Marcos regime would finally end. I remember though going to a small museum where Ninoy's things were displayed. That was my first encounter (in the flesh) with Cory and Kris. Cory also signed the booklet that we bought that day.
I was ten when the EDSA Revolution happened. As a kid I was just happy that classes were suspended and I finally had the time to learn how to use my shiny, new red BMX. We had lots of homework though and one of the tasks was to cut-out important clippings from broadsheets. I clipped out a lot and wrote down a short reaction at the bottom of the clipping. That was also the time that I read a lot about Ninoy's widow, Cory, and she took on his fight for democracy.

Yellow became my favorite color and I collected all things related to the snap elections. We campaigned for Cory and I always wore yellow ribbons with my pigtails. Apparently my teachers thought I had very intelligent thoughts about the issues (thanks to my Dad) and chose me as one of the “flower girls” to greet Cory when she visited her alma mater (St. Scholastica's College).

Everybody was excited for her arrival. The Benedictine sisters were very proud of her and our teachers kept giving us instructions on how to hold the huge paper yellow rose we had to hold up. We were supposed to flank her as she walked in, but I think we ended up not doing it properly because the crowd went wild when she arrived. I don't remember what she talked about. 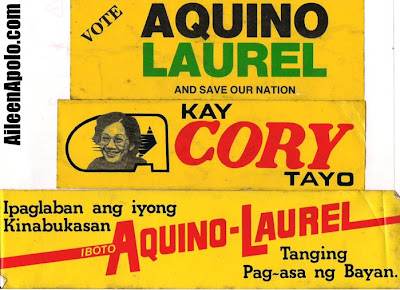 I had these stickers inside my cabinet for the longest time.
My Mom took it off about a month ago and gave it to me for safekeeping.
She was my hero. She did not have to take on Ninoy's fight for democracy. She probably did not have the right training, the exact background, but she did. And looking back I think she was perfect for that moment and whatever background she had was enough to bring the people together to fight the Marcos regime.

I admire her a lot because of her faith. I cannot imagine how hard it must have been for her to run our country. In transition at that. One coup d' etat after another also came, the bloodiest one happening on my birthday. But Cory held on and did not break. It was her faith that probably kept her together.

Family. Faith. Love for country. Commitment. Forgiveness. And honesty. Those are just some of the things that I have learned from Cory. She lived it and breathed it. She was not just our president, she was a mother to all of us. The mother who saw us get out of an ugly regime that sowed the seeds of corruption, dishonesty and greed.

Thank you Madam President for giving a huge part of your life to us Filipinos. For all the sacrifice you have made, may we remember and act on individual commitments to uplift our nation. All it takes, at the very least, is a random act of kindness.

Email ThisBlogThis!Share to TwitterShare to FacebookShare to Pinterest
Mga etiketa: i love the philippines, tribute for cory aquino