I must admit, I have not been following closely Rivermaya, Ang Banda ng Bayan. I know most of their hit songs and just own one CD - The Greatest Hits Album. Yeah, I know, shame on me. But, it's never too late to become a fan!

There was a huge stir last year when Rivermaya's lead vocalist, Rico Blanco, left. All the fans were heartbroken and asked, "Would Rivermaya survive?" Eventually the group decided to look for another lead vocalist through a contest and Rivermaya is complete once again with the addition of Jason. 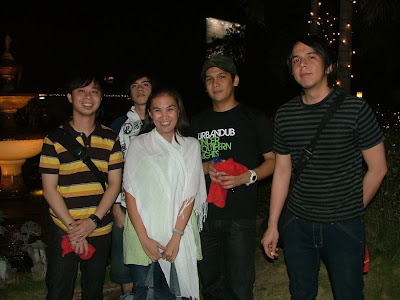 Me with Rivermaya! Yay! (Photo by JayDJ)

The first time I encountered Jason was when Sweetie showed me a photo of the new group. He was obviously new to the group since he looked really shy. The next time I saw him was at the OPM Songhits Music Awards last November and his bandmates had a ball letting fans lose on him. He looked quite overwhelmed. It was when they performed I saw why he was chosen to be the new lead singer. The stage becomes him. From the shy, cute-geeky looking boy, Jason becomes a total performer and someone who, I expect, would have hordes and hordes of fans. It's a total transformation, believe me, and the tube doesn't do him much justice. You have to watch them perform live!

The band's definitely alive! Check out their newest album, "Buhay" (you can also order there for those who are overseas).

Here they are performing "Buhay"