The Piano Guys and their Amazing Music

I practically flew to The Star Performing Arts Theater last night fifteen minutes before the concert of The Piano Guys started. In the afternoon around 4 pm Sweetie asked me if I wanted to watch The Piano Guys if he'd be able to get tickets. I was having another bad health day, but I said yes, of course, it's The Piano Guys. Bahala na si Batman.

So I went home around 5 in the afternoon because I was feeling unwell. I thought I'd rest a bit first since we weren't sure yet that we'd be able to watch. I had wanted to watch the concert since it was announced that they were coming to Singapore. I held off buying tickets because of my health. I was getting better already, but then I caught a nasty bug and my cough hasn't gone away.

Around 7 in the evening I gave up already since Sweetie said he didn't get the tickets. I settled down then to watch Suits while nibbling on my Auntie Anne's pretzel which Sweetie got for me the previous day. At exactly 7:30 in the evening, Sweetie confirmed that our date was on! I quickly showered, got dressed, put on some makeup and flew to Buona Vista. I was so hungry though so I had to eat first the chicken quesadilla got for me. I.eat.so.sloooowwwww...

Managed to reach the door for our seats by 8:15pm just about when the host introduced The Piano Guys. And as we were about to enter the theater, they were playing this -- 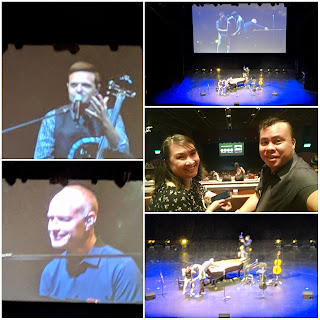 So I guess it was really meant to be. I have been listening to The Piano Guys for a long time now. They are one of my favorites and always in my Spotify rotation. I even have a couple of their albums, so I was really ecstatic that I'd be able to watch the show with Sweetie. The music of The Piano Guys is really different. It speaks to my soul. Steve mentioned last night that when you learn an instrument, it's really hard in the beginning, but with practice eventually you're going to feel like you are flying once you really learn. I know that feeling because it took me multiple teachers to finally learn how to play the piano. And at that time I was at my peak I felt like I was flying whenever I played the piano. It made me happy.

Something in me changed last night. I have not been feeling well since I had mild pneumonia last July. I was getting better, but then I caught a bug which set me back big time. I have been so annoyed at my body. My Kuya though told me that I should focus on getting well. He tried to reframe me, but there was always that nagging feeling that I wasn't getting well as fast as I wanted. Last night, the music of The Piano Guys seemed to reach my soul to bring out the fighter in me. It brought me back to those days when I would play the piano for many hours without a care in the world. The music bridged me back to that happy place. The message was made clear with this song --

Wow! What an amazing experience to watch The Piano Guys. They said they were just a bunch of dorky dads who we made rockstars that night. From my point of view, they are really rockstars. They are very talented and deserve all that they have now because of the happiness their music brings.

Thank you Jon, Steve, Alan and Paul for being amazing human beings and thank you for an unforgettable night!