I was clueless about how we were going to celebrate V-day (a belated one). All I knew was we were going to Megamall to meet a friend and drop by an expo. By Friday night I was already going crazy over the surprise (OC ako eh!) and was trying to wheedle it out of Sweetie all night, to no avail. So, I had to wait!

After the meet-up, surprising Richard Poon (I bet he never expected us to show up in that event), and hyperventilating at the expo (thank God for the huge electric fan at the Megatrade Hall), I was whisked away to the Metrowalk area, still clueless about where we were going. I was just told we had to eat dinner and then we had to go and "claim" the gift. 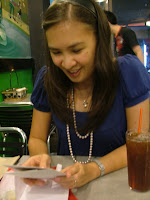 I was then given an envelop and in it were 2 tickets to MYMP's "A Valentine... So Perfect" concert at the Meralco Theater. I did not realize immediately that the concert was about to start in 30 minutes and that Meralco Theater was just a stone's throw away. I had to ask, "Kelan ang Feb 16?". Me, the dodo. I finished my dinner in no time.

I love OPM. I've said that time and time again and I just cannot help but feel starstruck whenever I meet an artist and I don't think I will move past being a fan. Anyway, I couldn't help but giggle last night when we arrived at the Meralco Theater. Why? Because the whole place was filled with lovers! Mag-jowa! Magkasintahan! Good thing I have Sweetie because if I didn't and attended that concert I would've ended up depressed over the lovey-dovey feeling in the whole place. 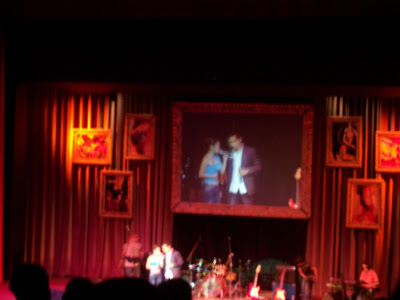 Juris and Thor
The last time I watched MYMP was back in 2006 at the Araneta Coliseum with my friend Mabel (and we sat at the bleachers!) and I truly enjoyed watching them. Juris gave a heartfelt rendition of "Bukas na lang Kita Mamahalin" and Chin gave a powerful performance of "Kisapmata". They also introduced what I'd say would be the Philippines' version of "Rod Stewart" - Tata (hope I got that right). Thor also graced the occasion and did a duet with Juris, "Be My Number Two" (check out his album "Soul Obsessions" it's really good).

I've heard of surprise proposals - done in concerts, with famous authors, or even as scavenger hunts - but I've never witnessed one (planned some yeah, but not I have not witnessed one). Juris announced that they were going to name someone "couple of the night" and while she was singing, photos of different couples were flashed in the screen. The couple in the final photo was called down to the stage and were given some flowers and gifts.

Juris asked the girl to give a message and she just said, "Thanks sa treat, happy valentine's and... I love you." The crowd cheered! Sino ba naman di kikiligin nun? Then the microphone was passed on to the guy and he was quite formal at first, greeted Juris and Chin, the audience and then he said, "Juris I hope you don't mind if I say a few words." The audience suddenly became silent. And then the guy said, "Hon I spoke with your brother 3 nights ago..., " the audience started going wild here, "and I told him `ang kapatid mo ay mahal na mahal ko at siya lang ang mamahalin ko buong buhay' and then I told him that I want to take care of you," then the guy kneels down
Ipinaskil ni Aileen Apolo-de Jesus sa 2/17/2008 02:49:00 AM