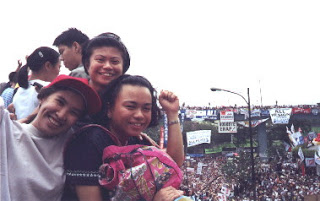 It's really sad that this fear is back. My Mom, my colleagues keep telling me to just stay where I am right now. And it's really sad not to know what I could do as well. I don't think another EDSA will fix it because transformation has to come from each one of us. So I just pray that things would go back to what's best for our country.
Ipinaskil ni Aileen Apolo-de Jesus sa 3/07/2017 12:37:00 PM