Posting for the Philippine Red Cross 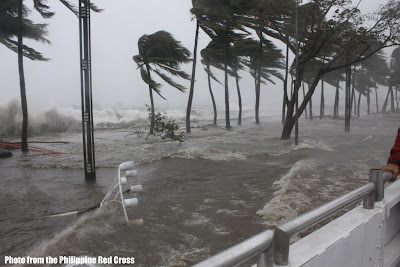 As Typhoon Pedring (international name: Nesat) continues to slam the Philippines, authorities have ordered more than 100,000 people to shelter from rains and winds of up to 170 kilometers per hour, which prompted the closure of schools and government offices. Electric power has been cut in many parts of Luzon, flights have been cancelled, inter-island ferries have been grounded as thousands of civilians are stranded and more than 50,000 have moved to evacuation centers or relatives’ homes nationwide.

The Philippine Red Cross (PRC) has deployed 2 rubber boats and a 6x 6 truck to Baseco, Manila where a mass evacuation of an estimated 800 to 1,000 persons was conducted. Approximately 200-300 individuals were evacuated and moved temporarily to a covered basketball court. 469 families who were moved to the Delpan Sports Complex earlier were transferred to the P.Guevara Elementary School in Manila. PRC also deployed 2 rubber boats a 6x6 truck to assist 100 individuals being evacuated to the Dagat-Dagatan Elementary School. The PRC also responded to Payatas where a structure collapsed. A 6 x 6 truck, amphibian and 3,000 watt generator have been deployed to the Ospital ng Maynila to assist in the evacuation of 300 persons. 115 bags of blood from Ospital ng Maynila have been temporarily moved to the PRC National Blood Center for proper storage during the power outage.

PRC maintains strict 24-hour monitoring of all situations throughout the country, while conducting detailed assessments in close coordination with the National Disaster Risk Reduction Management Council. Evacuation centers in Nueva Ecija, Manila, Marikina, Rizal West and La Union are temporarily housing a total of 3,098 persons. Hot meals have been prepared for distribution in evacuation centers. 3 welfare desks have been situated in Metro Manila. 36 PRC search and rescue teams and more than 1,056 staff and volunteers have been mobilized or on standby for further intervention.

Pedring has claimed the life of one year-old baby Shawn who drowned in Catanduanes after falling into a river. Four fishermen have been reported missing. 45 passengers were stranded in Tabaco Port in Albay. In Camarines Sur, 6 small fishing vessels manned by 27 fishermen were found in Butawanan, Siruma. In Sorsogon, 150 passengers were stranded in the Pilar Port. A tornado hit the town of Maconacon, Isabela yesterday that lasted 4 minutes, destroying properties along its path and ripping the roofs off of 5 houses, injuring at least two people.

Pedring is the 16th cyclone to lash the Philippines this year. As we continue to wage this battle against disasters, we are in need of cash assistance to provide ongoing relief and recovery efforts for all affected communities. We are appealing for your support to be able to continue to provide food, non-food items and our services to the most vulnerable in the hardest hit cities and provinces. Through your generosity, we can stand prepared for the onslaught of disasters. We appreciate your continued support to the Philippine Red Cross. Thank you!