Bloggers Kapihan blog action for this week is about "Remembering People Power 2" and I thought I'd share my experience about it. I do remember People Power 1, I was a kid then and very much a supporter of the change in government. It was what was needed my parents explained to me. I remember collecting newspaper clippings and reading up about what was happening in my surroundings even though I didn't exactly understand what was really happening. I remember it well coz classes were suspended for about a long time and that's the time I learned how to ride a bike (all on my own). I also remember being one of the "flower girls" when former President Cory Aquino (she was still just a candidate then) visited our school (St. Scholastica's College). I welcomed her in my school uniform with matching yellow-ribboned pigtails (now don't go looking for a photo, I don't have one). That was back in 1985... fast forward to 2001. 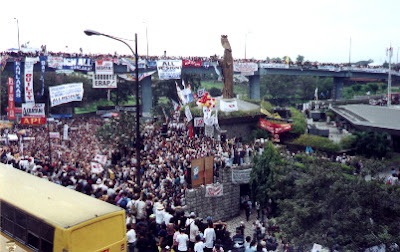 So, 16 years later People Power 2 was staged to overthrow former President Estrada due to a long list of things. I think that served as a very good lesson to everyone that electing the right person is key to our nation's success and that being president is no mere acting role. I would never dream, nor aspire to be in that seat. Goodness! Eh di lalo na ako di naka-blog! LOL. But kidding aside, we all know how important it is to have good leaders `coz good leaders build great nations (now how do we get back to being Asia's tiger???). Anyway, this ain't a post about how to be a good nation, it's about remembering People Power 2, sorry I digressed.

Anyway, I was old enough (of course!) to go to EDSA during People Power 2. My parents though did not allow me to go on the the few days. I went on the last day with 2 of my high school buddies, Mercy and Chare. We took the MRT and walked up the bridge to get a better view of what was happening in the EDSA Shrine. There were loads of people and loads of support coming in from different areas. Free food and drinks! It was a very peaceful rally and everyone was feeling jubilant. The most memorable thing that happened was witnessing GMA being sworn in as president. I am a huge, huge fan of former Chief Justice Hilario Davide and I was very excited to see him swearing in GMA - he represented the legislative side of government which legitimated the "take over". I couldn't help but cry over how things were going. My thought balloon then was, "Now at least with GMA as president we can move forward and do without worrying over our president's activities." 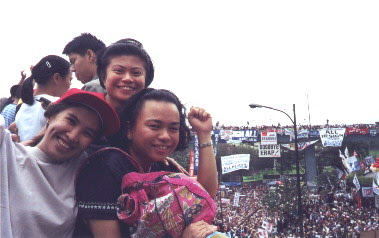 I felt jubilant that day. I witnessed firsthand how democracy works, but I also felt nervous - what if this was abused? Well it did, a few months after with EDSA 3, but it didn't work out. I know the feeling of getting mad and agitated about what's happening around. I lived that for a couple of years while in college. We were kept angry and I eventually realized that writing my observations and criticism about how government was doing things wasn't really going to help anyone (except get as mad as me), so since then I concentrated my efforts in helping society in other ways.