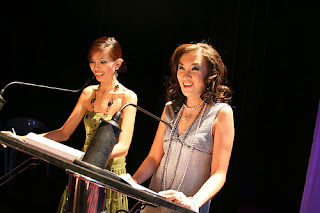 I would say it was all worth the effort for the organizers of the Philippine Blog Awards. Yehey! President Donald asked me during the cocktails who the president of bloggers were, but I surprised him by saying that the PBA was just an effort of volunteers. It is much more fun to help out in events initiated by pure volunteerism and I salute the efforts of Abe, Gail and Jayvee for organizing the Philippine Blog Awards. That's why I didn't hesitate in helping out when they asked me and Sasha to be the emcee for the evening (uh I didn't know what I was getting into, I thought they weren't really serious about it LOL). Anyway, it was a pleasure to work with friends and see how the blogging community has grown. (That's me and Sasha during rehearsals. Photo by Karla) 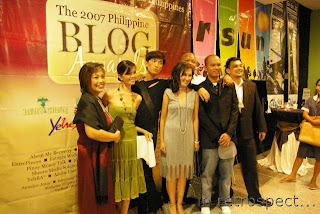 The audience was quite... quiet! Well, they're bloggers! And bloggers are supposed to be noisy online and not really offline. (And I was right, the blogosphere's full of PBA stories). Pffft! I hope we didn't bore the audience. Jomar's Dad, Mr. Frank Hilario said that the event was simple but he could feel the anticipation. Retz, winner for Best Entertainment Blog, said that the adlib Sasha and I were doing when we were waiting for the presentor to announce the winner almost killed him and someone in the Pinoyblogosphere mailing list said, "Masaya yung blog awards no...". And a lot thought that Sasha and I were best friends! Hihihi. Well what's important is everyone had a grand time and appreciated the efforts of the organizers. Whew! (That's me with Noemi, Sasha, Bryanboy, Abe, Marc and Jayvee. Photo by Chris Haravata) 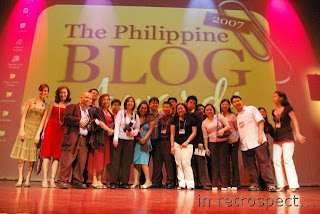