I was home alone during Holy Week since my family left for Bicol. I, unfortunately, was not able to attend the Bo Sanchez retreat I signed up for and it was too late for me to go home to Bicol. Fortunately, the ever generous Marc invited us to tag along with him and the Sharms.

Traffic was bad on Maundy Thursday. We left the Olandres manor at around 9:30 a.m., fetched The Jayvee at Starbucks, Magallanes and reached Shell at NLEX by noon. We had another stop over at Total and had a sumptuous Tapa King meal with iceless iced tea, bought lots of chips and proceeded to Bataan. The scenery was... uh... I was asleep most of the way since I was in some kind of torturous pain from playing badminton the previous night.

We reached the Macalua mansion in Bataan at around three in the afternoon and was served yummy palabok with pusit. The guys were grossed out with the inky black pusit and just got servings from the sides of the bilao. The palabok with pusit was so good, Sharms and I had a feast. As with tradition, we did visita iglesia and visited seven churches. It was a photography feast for Abe and Jayvee and I just basically did my prayers and thanksgiving. I realized though that churches in the provinces look alike. I thought I was in Cebu in one of the churches and in Quezon in another. 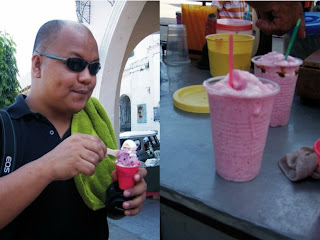 The next day we missed the flagellants. Marc's tita said that there were over a hundred this year and she also gave a very gory description "dugo all over the place". Whew! I thought. Good thing I didn't see that. We tried to catch the "nailing on the cross", but after going back to the church several times we just gave up and had dirty ice cream and ice scramble outside of the church. In the evening we witnessed the procession and I was pleasantly surprised that there were a lot of people who joined the procession. The number of people who attend in our parish have been dwindling through the years. :(

Mount Samat isn't as huge as I thought it was. I think it's about 55 meters high. I was 10 years old and a dwarf the last time I went to see Mount Samat with my Kuya. And I really thought it was a towering cross. Anyway, the majesty of the cross is still the same and it seems to have been rehabilitated during the Ramos adminsitration. What's interesting to see inside are the "secret message" memos sent by generals to each other. Seeing the cross I also remembered the grandfather I never met. He was part of the death march, but luckily survived.

After Mount Samat we proceeded to Clark, Angeles, Pampanga. We had "lunch" (at 8 pm!) at the Historic Camalig Restaurant. The spaghetti and pizza I had were delicious. Aside from the yummy food it was an interesting place since it is the ancestral home of one of the prominent families in Pampanga. I wondered if there were any ghosts floating around the place. Good thing I was too hungry to notice. The "Turn Back Time" band was charming, laid back and their 60s and 70s song selection brought out the "my Dad has LPs..." stories. Later in the evening, after checking in a hotel, we found ourselves eating once again and trading more stories.

Before leaving for Manila, we just couldn't resist and visited SM Clark, Pampanga. It looked a lot like the Mall of Asia with the wide spaces and the shops were almost the same. We had to wait a long time though before Pancake House managed to serve our food. The steak wasn't bad though... now I couldn't wait to play badminton again. Gotta get off these unwanted fats!