So, I'm laying off the love and relationship posts for now. I'm probably freaking out a lot of people (most especially my friends from other countries) already. Hehehe... sorry.

Anyway, in the past couple of months I've met soooo many people. Interesting, funny, unique and even weird people, and persons who I think would really go a long way. I've chatted with some of them and I'll be posting about them from time to time.

Some of you might have seen him on TV already coz he's been featured several times on shows like Unang Hirit because of his very interesting and unique hobby - making costumes out of rubber.

I met Mark backstage during one event and I got to chat with him and found out that he just accidentally learned how to make these costumes. He was just asked to watch over another guy who was giving lessons on costume making using rubber. He found out that he enjoyed playing around with making things out of scrap rubber. Made some costumes, joined some 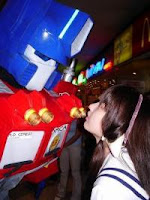 cosplay gatherings, joined contests and won. He is set to compete in other countries in the coming months and is being sponsored by the Marikina City Government for that (but he needs more sponsors!!!). 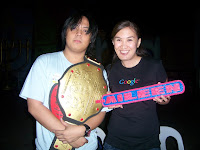 I was quite happy over meeting Mark because he's got so much passion in him. Very unassuming, humble and open to anything. Congratulations Mark and good luck in the contests you'll be joining! (I'll send you some tips on how to cost-out your stuff, I promised!).

Mark accepts orders for costumes. If you're interested, please email me privately and I can hook you up with him.