The Most Horrible Taxi Ride Ever

My bottomless optimism almost hit rock bottom today after experiencing the most horrible taxi ride in my life. This ride's worse than the roach-infested taxi, the gas smelling taxi, the reckless driver, the time I got harassed (driver almost brought me in a motel), etc. etc. The taxi was in perfect condition and the driver drove just fine. What really irked me was the blatant deceit through it's taxi meter.

The cab's meter was a new one, it wasn't the usual red-lighted meter. I noticed because I always check if it was flagged and running properly (yes I am paranoid that way). We got the taxi at SM Mall of Asia and I was surprised to hear a sound coming from the meter. I was shocked to witness the meter jump from 30 pesos to 40 pesos as we were turning right to Macapagal Avenue. I thought I was just imagining things but it happened again and the meter was at 60 pesos even before we crossed Roxas Boulevard to the Airport Road.

I fell silent after that and communicated with Jay and Miguel via SMS so as not to alert the driver that we were having suspicions that his meter was rigged. I told Jay that I couldn't see meter because the driver was covering it with his hand on the clutch (isn't it supposed to be on the dashboard and not by the clutch?). He then started to send me messages on the amount. Traffic wasn't as bad as two weeks ago, but by the time we were beside the airport I was alarmed to see that the meter moved by 12.50 in four minutes. 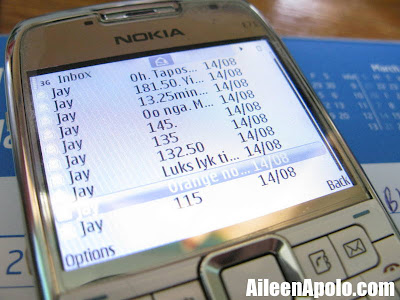 And we had barely moved 5 meters during that time (we were about to turn left to Kaingin Road). I was really alarmed by then because I remember the taxi we took 2 weeks ago (same route) billed us only 140 pesos (I added 30 pesos as goodwill because he was an honest driver and traffic was quite heavy). I realized then that we were being robbed. By the time we reached the end of Dona Soledad the bill was at 192.50 and I told Jay that I wanted to get off of the cab already since I was scared that the bill would reach 300 pesos.

I gave Jay 205 and tried to get out of the cab immediately (it was hard because the door handle was broken). When I got off a traffic enforcer approached the taxi and told the driver the he was holding traffic up. I wondered why Jay was taking so long to get out of the cab. Apparently the driver was asking him to give him 20 pesos more, but he didn't have any change and finally got out of the cab. I then told the traffic enforcer that the taxi's meter was rigged and that he was asking us for additional payment.

Better Living traffic enforcer J.V. Baticados then arrived and taxi driver's license and ticket in-hand asked me what happened. I was just starting to recount my story when the taxi driver flashed Baticados a "card" with a smile. Baticados then told me, "Wala ako nakikitang violation nitong taxi na ito." (I don't see any traffic violation). His tone totally changed when the driver flashed him the "card" (I only saw the back side). I then told the traffic enforcer what happened and then he asked me, "So ano lalagay nating violation?" (What violation do I put?). I then called up my Dad to ask what violation to place, he mentioned that essentially the driver was in violation of the taxi's franchise.

When I told this to the traffic enforcer his tone changed again and said that maybe we could just ask the driver to return the excess money and that we should just complain to LTFRB about the problem so that we won't be hassled anymore. I knew then that it was a dead-end for us so I agreed but said that I was really going to send a complaint. I said that he should just return 50 pesos. The driver then said, "Sus, 50 pesos lang pala, ito 100!" (So it's just 50 pesos, here's 100!).

The driver then tried to intimidate me by shouting at me, "Sino ka para paalisin ako?" (Who are you to tell me to leave).  I just replied that the traffic enforcer told him to leave already and that he shouldn't be bribing him. Baticados then told the driver to leave and said, "Hindi kami tumatanggap ng lagay noh! Kami dito sa Better Living tapat kami!" (We don't accept bribes. We here at Better Living are honest!). And while he was saying this he was putting whatever the driver gave him in his pocket. Driver left and Baticados immediately left as well.

We were left with the other female traffic enforcer who was then denying that the driver was trying to give her money. She assisted us to get on a tricycle. A few meters away I saw the taxi parked and the driver got off of the cab. I told Jay and Miguel to hide because I wasn't sure why the driver was there and I was scared that he might follow us home. Miguel said that he saw the motorcycle of Baticados parked near where the taxi was.

I've reported this incident to SM Mall of Asia's hotline number and also sent an email complaint to LTFRB (as suggested by someone I know who works for MMDA). I won't bother reporting to the DOTC hotline since I've reported so many incident there already and I never saw any action anyway. Oh, after doing some online research we found out that the taxi franchise PAFC Transport Coop is under the Philippine Army Finance Center. I tried calling their number too, but no one was answering.