I must say I've been living a horrendously crazy schedule the past few weeks and that's the main reason why I haven't had the time to blog. My Davao-based friend, Migs, noticed that I've been making "summary posts" the past few weeks. Ahhh, sowee, I've been just really extra busy.

Anyways, I felt like I was a contestant for the Amazing Race last week. I'd say it's one of my busiest weeks for the year, having 2 sets of visitors, an event for educators (another one of my backlogs), the 1st OPM Songhits awards, dinner with Sweetie's friends, and speaking engagements in Cebu and Davao, plus a whole lot of other stuff. I had to talk really fast for my gig for STI in Cebu to catch my flight to Davao. I arrived at the airport just before the counter closed (whew!).

At STI's National Youth Convention in Cebu. Photos by Mhel and Kim.

Check out the full album at the STI Picasa Web Album.

I was quite overwhelmed with the number of students present at the Mindanao Students IT Education Conference. I had to psyche myself up not to hyperventilate over speaking in front of 3,000+ students. Here's a short glimpse -

After speaking at the MSITE I was feeling quite dizzy and slipped out just before the event ended. I had dinner later on with Davao friends, The Usual Suspects - Blogie, Migs, Winston and Jun and met Ted Padova (Adobe evangelizer) and Rodney at the Fwendz Diner. 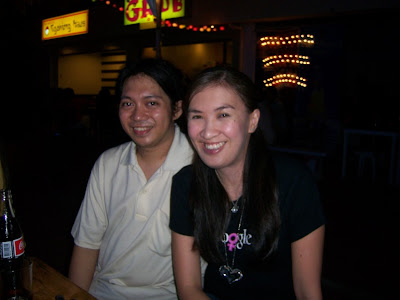 After eating a hefty dinner, we proceeded to the Nokia party and enjoyed taking photos -

So, we thought we took more than enough photos, and moved to Basti's Brew for a late night cup of coffee and then called it a night.

The next evening was a really interesting one. After eating a late merienda at Basti's Brew, Andrew, Migs, Ria and I proceeded to Hairzone and indulged ourselves with a foot spa/massage. It was Andrew's first time to have one and the look he had on his face when the attendant asked if he wanted colorless cutex to be painted on his toes was priceless. And it's only in Davao that I've experienced having foot blush wiped on my talampakan. (Methinks I need the works to really feel relaxed).

It took the whole session for us to finally decide where to head for dinner and we ended up at Red Moon Chinese Cuisines & Delicacies and was joined by Blogie. For more in-depth coverage about Red Moon, head to my Lakwatsera Ako blog.

Things just got more fun after dinner. We moved to Studio Onnie, located just a few steps away from Red Moon. Studio Onnie, owned by Onnie (who's really cute and funny, and a local celeb for ABS-CBN-Davao), is a comedy bar with Ahbet as its most popular host. I was quite lucky to meet them since everyone is Blogie's friend. Take a look at the photos and find out what transpired while we were there.

Here's me and Winston being grilled by Ahbet.

As if hanging out at Studio Onnie wasn't enough, Blogie insisted on giving me a tour of some new stuff in Davao, so we went to see David in all his glory at Seawall and the fabulous, wonderfully decorated Davao City Hall.

Whew! I just conked out the whole day yesterday after celebrating Mom's birthday when I got back.