I barely slept last night also even though I'm far away from home. I was worried for my family and friends. Reading their tweets about the howling winds, strong rain reminded me of a few typhoons I've been through - Ondoy, Basyang and experiencing the winds of Yolanda in Baguio.

The past three weeks has been one typhoon after another - #QuintaPH, #RollyPH (the supertyphoon), #SionyPH, #TonyoPH and now #UlyssesPH. Being far away from home is hard. I monitor the news and make sure my family is prepared for the typhoon. I must admit after overpreparing for the first four typhoons we kinda got lax preparing for #UlyssesPH. It was too late when I realized that it was a strong typhoon that would hit Manila. 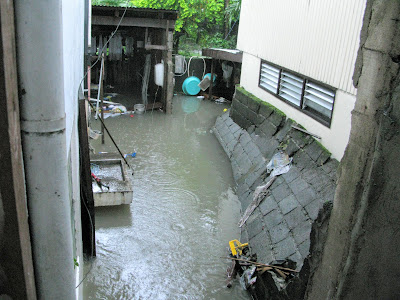 And thus the sleepless night. I was still able to call my Mom. It was already late and I asked her why she was still up. She said she couldn't sleep because they had no electricity and she was monitoring the typhoon. She said she'll be okay. When I woke up I checked the tweets coming from my city and I came across a tweet about the electric post across my Mom's home. A tree was hitting it and creating sparks.

A friend reached out to me and helped call the barangay to have the tree cut. Another neighbor also said that the electric post at the back of Mom's house was also being hit by a tree. I really appreciate the help of my neighbors (guardian angels) who responded to my plea. I'm thankful that everyone was well and safe at home. My Mom's garden was not spared and we still need to check if anything else is damaged at home.

I'm worried though about my 99-year old uncle in Marikina. I'm not sure if he's still in Provident Village or if he moved with my cousins. I'm still waiting to hear back from my cousin. Dad (my father-in-law) in Marikina experienced flooding at home and he's okay. I pray he doesn't get sick from walking in flood water. In Bicol, it's been hard to reach my Tita Olive, so I've been monitoring Mayor Nino Tayco's page for updates about Pasacao.

If you're feeling really stressed about the typhoons, my Kuya's video here may help you.