Bouncing Back from this Setback

The events in the last two weeks have been challenging. The good news is my heart is okay, but my doctor is still deciding whether I should have more tests. I missed seeing my other doctor last Saturday, so I need to re-schedule that. Since I had no diagnosis said my doctor said just take it slow for now, stay happy and eat oatmeal.

I'm as baffled as my doctors on what really happened, but I'm leaving it up to them to figure it out. There's no use for me to be anxious about it. I need to focus my energy on getting well. I'm still experiencing some of the symptoms off and on, so I'm taking it slow for now. 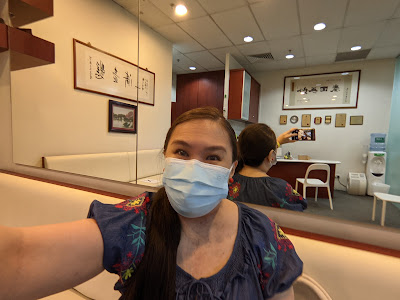 This was at my cardiovascular surgeon's office. My other doctor made tsismis to me he did another pro-bono delicate heart surgery for one of the hospital guards. A week after my surgery he did a heart surgery for a baby. My doctor is truly a lifesaver, you need to see the photos of all the babies he has saved.

If you read up on pneumonia caused by legionella bacteria (legionnaire's disease), the symptoms are very similar to COVID19. Overall mortality rate is 5-10% (source: WHO). It is a nasty disease and it took me a year, a miracle for me to get well. It's one of my battle scars that's now causing issues. Unfortunately all my medical reports from that time were damaged during typhoon Ondoy. The only record I have is the blood test my doctor here in Singapore did a few weeks after I got discharged from the hospital.

So this is something I need to ask my doctors to investigate further. It might be scars in my lungs causing issues or my unusually prolific vein system. Both issues cannot be solved by medication or an operation. I will need to get myself to work harder to heal -- through exercise, better nutrition, more positive vibes and a prayer for a miracle.