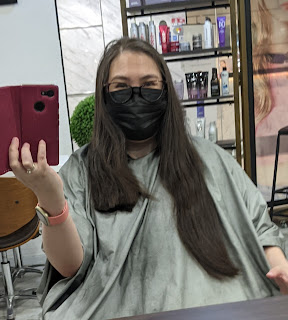 My Mom has been telling me I look like a bruha (witch) already. My hair has gone so long and it's been unwieldly. I have been planning to get a haircut for three months already. I was set to go to the salon last week, but it rained so hard after my PT session. I hurriedly went home since I didn't want to get stuck in the area (yes that happens here too). And then the haze/ozone thingy happened so I had to stay indoors.

I told myself last night it has to happen today! I almost postponed it again because I ended up chatting with my doctor for a long time. There were so many things to report! We also had to talk about long-term management of my health. It was noon already by the time I left his office.

But I did it! I went to a "Korean salon". I had gotten a haircut there once and felt they can do a good job. I usually get my haircut in Manila since it's much cheaper there. I never had a bad haircut back home. My last proper haircut was in Q4 2019. I had one haircut last year at the express salon in Bugis. They just literally chopped off my hair hahaha.

Sweetie prefers to have my hair long. I guess I really look like a bruha already because he's been asking me when will I get a haircut. He had a lot of bilins last night about keeping safe hehehe. I braved it today and here's the outcome -

As usual the hairdresser asked me if I colored my hair. LOL. I said nope (thank you Mom for my beautiful hair). She also said my hair is chemical free because it's soft. Haha, I think she was just happy she had very long hair to chop off. I think she did a good job noh?