Today Pope Francis celebrated the 500 years of Christianity in the Philippines with a mass at St. Peter's Basilica in Rome. I couldn't help but tear up when the choir sang Filipino mass songs. It felt so different since it's been over a year since we heard mass in Manila (in person).

Pope Francis in his homily focused on the message that God loves us forever. He thanked Filipinos for the joy we bring to the world and Christian communities. He said that Filipinos bring their faith and naturally evangelize wherever we go. We are silent spreaders of faith across the world.

I remember many years ago, a self-proclaimed agnostic left a nasty message to a friend who was sharing about his faith. I commented back at him and asked him to be respectful of the faith of others. That incident affected me. I got scared to write about my faith. I told myself that it's a personal thing anyway. Because I was partly withholding part of myself I became uninspired and rarely wrote. 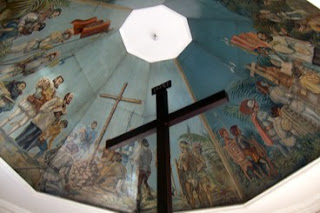 Healing is a journey and that's why I started daily blogging again since January 1 last year. Writing has been a coping mechanism for me. My Mom was the one who encouraged me to write since I was 8 years old. Although it's my Dad who really wrote. He used to write everyday. His writings were mostly about how to make life better. It was his way to spread joy and his faith.

And that's what I want to continue doing. As Pope Francis said during his homily, we must keep evangelizing and spreading God's love. Be joyful.

If you missed the mass with Pope Francis earlier, you can watch it on the video below. Also, plenary indulgence will be granted to those who do a pilgrimage to any of the 500 designated jubilee churches until April 22, 2022 (Paranaque Jubilee churches here).

Let's celebrate the gift of Christianity from God :)