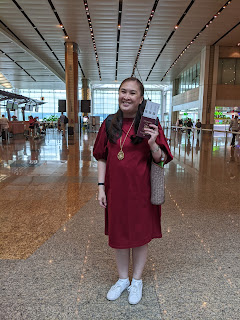 On Mondays I think about traveling. It's almost seven months now since I last got on an airplane. Not traveling is driving me a bit crazy because I've never been grounded this long (even after heart surgery!). I was musing last night about weird routines I do at airports. It will probably take a long time before I can travel again, so I thought I'd write my rituals down so I don't forget.

One thing I love about living in Singapore is the easy access to teh tarik. You can find it everywhere. I prefer teh tarik over bubble tea tbh. I always have a cup of teh peng before I fly out of Singapore. I oftentimes skip going to the lounge so I could have my cup of milk tea.

There's two things I usually do before I leave Manila: (1) Buy our dinner, usually Max's or Kenny Rogers; and (2) Buy something at National Bookstore! I buy dinner so the boys can eat something fresh from Manila (sometimes I squeeze in some Jollibee/Wendy's/Mary Grace for the next day). National Bookstore is one of my favorite places. I always buy a book or magazine which I read in-flight. 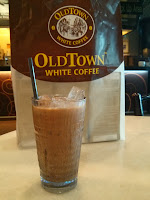 I super love Old Town's white milk tea and that's what I usually have before I ride the train to the my gate. Sigh. It's been a year since I last visited Kuala Lumpur. I miss sitting at the Old Town Coffee Cafe, drinking my milk tea and watching people as they come and go.

There's two things I usually get at the Bangkok airport: (1) A nice quilted bag; and (2) Mango sticky rice with Thai milk tea. I don't go to Thailand often so I usually come to the airport early so I can explore the airport too. 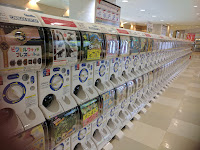 Oh there's a lot of things I like about the Narita Airport: (1) Play gachupon, (2) Buy some Japanese snacks and new flavored Kitkat chocolates, (3) Check out Pokemon items, and if I have time, (4) Eat or buy takeaway.

After I finish drinking bubble tea from one of the shops at the departure area, I usually head to the toy shop to look for something to bring home for the boys. They have a lot of Gundam and Transformer toys. 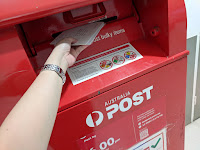 There's one thing I can get at the Sydney Airport which I couldn't from other airports -- quilt/patchwork magazines! I rush through the airport so I could visit all the bookshops. Oh I almost forgot, I usually mail postcards also from the airport since there's a post office near the check-in counter.

I was so hungry after a flight and ended up at a coffee shop at the basement. I ended up try bagel with cream cheese and white onions. I originally thought it wouldn't be good, but I ended up liking it. I think this will be my weird routine for this airport.

What about you? Do you have weird airport routines like me?